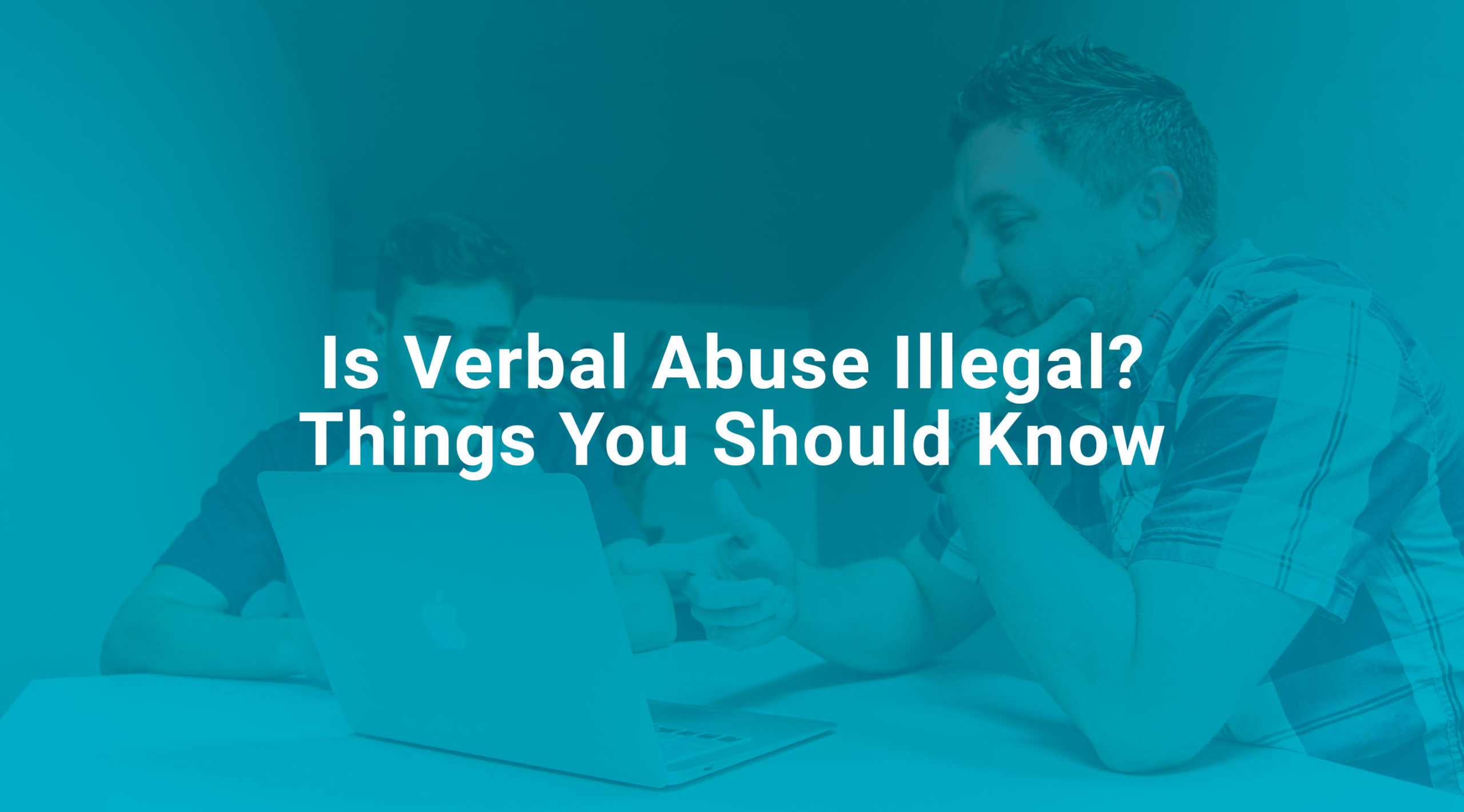 Is Verbal Abuse Illegal? Things You Should Know

We all know that verbal abuse is immoral, but is verbal abuse illegal? Verbal abuse is any verbal interaction that causes emotional harm to a person, frequently leading them to question their identity. It involves either bullying or saying unkind remarks to the person. It is a kind of verbal interaction that makes someone believe that they cannot achieve anything or prompt the question of who they are. It is a method to control and manipulate the other person's mind by maintaining power over it.

Verbal abuse may involve yelling, put-downs, name-calling, and bewitched behaviors. There is so much hammering in it, which most people ignore. Half of the people are verbally abused every day without having a glimpse of it. And the other half fails to notice their strengths and starts feeling inadequate, stupid, or worthless.

Verbal abuse is tranquil torture done by people with an evil mindset. The partner can use the daunting gaslighting methods, constantly correcting, interrupting, or putting down the victim. Some people tend to do it through prolonged silent treatment. If any of the mentioned activities are taking place, then the assaulter is trying to control the psychology of the victim. Some of the commonly used methods in the verbal assault are brought up to guide the victim through the process.

This type of verbal attack is the easiest one to recognize. You may ask why? It is a way to call the victim by second-class names or call with a funny accent. Having arguments that conclude to howling out one's voice or saying out aggressive injunctions can be anything but friendly.

Having a simple sarcastic conversation is fun, but it doesn't take much time for a tone to evolve from sarcastic to mischievous. It can start funny with easy jokes and chuckling, but as time passes, condescension becomes belittling.

Manipulation is a brutal assault to detect. It can be subtle and, at the same time, crooked. It usually happens when the victim is asked or ordered to perform uncomfortable activities, it usually happens. This task is achieved by giving promises or hopes or a vicious warning to the sufferer.

In the workplace, "verbal abuse," or merely making hurtful or derogatory statements, may result in disciplinary action or a harassment lawsuit, but this is not always the case when it comes to criminal charges. "Verbal abuse" does not exist as a crime. Physical assault, on the other hand, is a crime. Threatening physical injury or violence, on the other hand, is illegal.

The victim can seek assault or battery charges against you if you threaten or commit physical violence. Even if you do not physically damage someone, the threat of violence may be enough to lead to criminal prosecution. Any verbal threat can potentially be used to prove intent to harm, making the charge more severe.

Any verbal threat could potentially be used to harm or warn the victim. In verbal abuse cases, threats of violence will be enough to get you arrested. Hence, look for the keywords in the assault and use them smartly as a weapon against the abuser. The abuser may be punished for being arrested or charged or losing certain rights. This order can be passed as an order of protection.

Verbal abuse is considered a form of ragging, which exists as a form of crime. The language used and the vocabulary spoken could be used as an analyzing sword in the courtroom. But before considering these factors, it is vital to engage your case with a trustful and worthy attorney. The lawyer would be interested in making a move in the case only if the tone of abuse is unreasonable and outrageous and the vocabulary casted-off involves insulting or abusive words. Also, another critical factor is that the victim has to be mentally traumatized or emotionally damaged by it so that the law is attentive towards the file.

If the case is strong enough to hire a lawyer for the damaged party, a few conditions must be encountered to make a muscular and robust case. At the top of the list, the act committed should be intentional and done with a conscious mind. The second factor is abusive and offensive language which involves a dictionary of abusive, insulting, and offensive words. The last element to be considered is that the victim has accepted colossal scale damage from it.

It is possible to claim a verbal abuse courtroom case with the factors as mentioned earlier and consider it a particular issue with no form of physical activity or contact indulged. Many other charges will also apply if any reference is made intersected to cause harm. Another critical factor is that the communication, which is claimed to be a form of verbal abuse, should not be done by both parties; otherwise, the claim to file a case would be rejected. Usually, a victim with an injured mindset has traveled the abusive procedure single-handedly. To help you punish the victim, the legal professional will help you increase the odds of a successful outcome.

What are the steps to handle verbal abuse?

Verbal abuse happens out of nowhere. It is much more calculating and insidious for the people standing on the receiving end to overreact, blame, or question themselves. It usually happens in places where no human can intervene or listen to the conversation within the partners, which becomes a common trait of speaking as time passes. The people being a part of it usually start feeling the way or take it as an external punishment.

But, by being honest and gaining back control of the mindset, you can witness the strength inside your identity. It's important to acknowledge it as a priority because it helps you find yourself. While you need to assess the difficulties or conditions you are in, let us help you through the tips we see essential for overcoming virtual abuse.

Being free of mind will be important in boosting the endorphins because increased endorphins lead to happy hormones, which give sky-touching confidence for a reply. Let them know that if they scream or abuse, the conversation will end at that point, and you will leave the premises.

Restraining exposure to the culprit will guide you with the people who care, love, or support you. This can give you some time to reassess the situation and grasp what kind of surroundings you were into and what a healthy relationship should look like.

If there are no signs of verbal abuse being held or controlled, you would likely need to take steps to break the relationship if possible. By doing so, you are breaking the chain of abuse, but if not possible, you may want to develop a plan where things break off when the abuse escalates.

The simplest yet hardest thing to perform for some people is to seek help. Reach out to your loved ones or a therapist to assess your situations and guide you through the examination you are dealing with and process some healthy coping skills.

While verbal abuse is not a crime in and of itself, it can easily turn into one if it includes threats of bodily harm. If the verbal abuse is criminal, you must immediately report it to the authorities and inform them if you are concerned about your safety. Not all verbal confrontations are abusive.