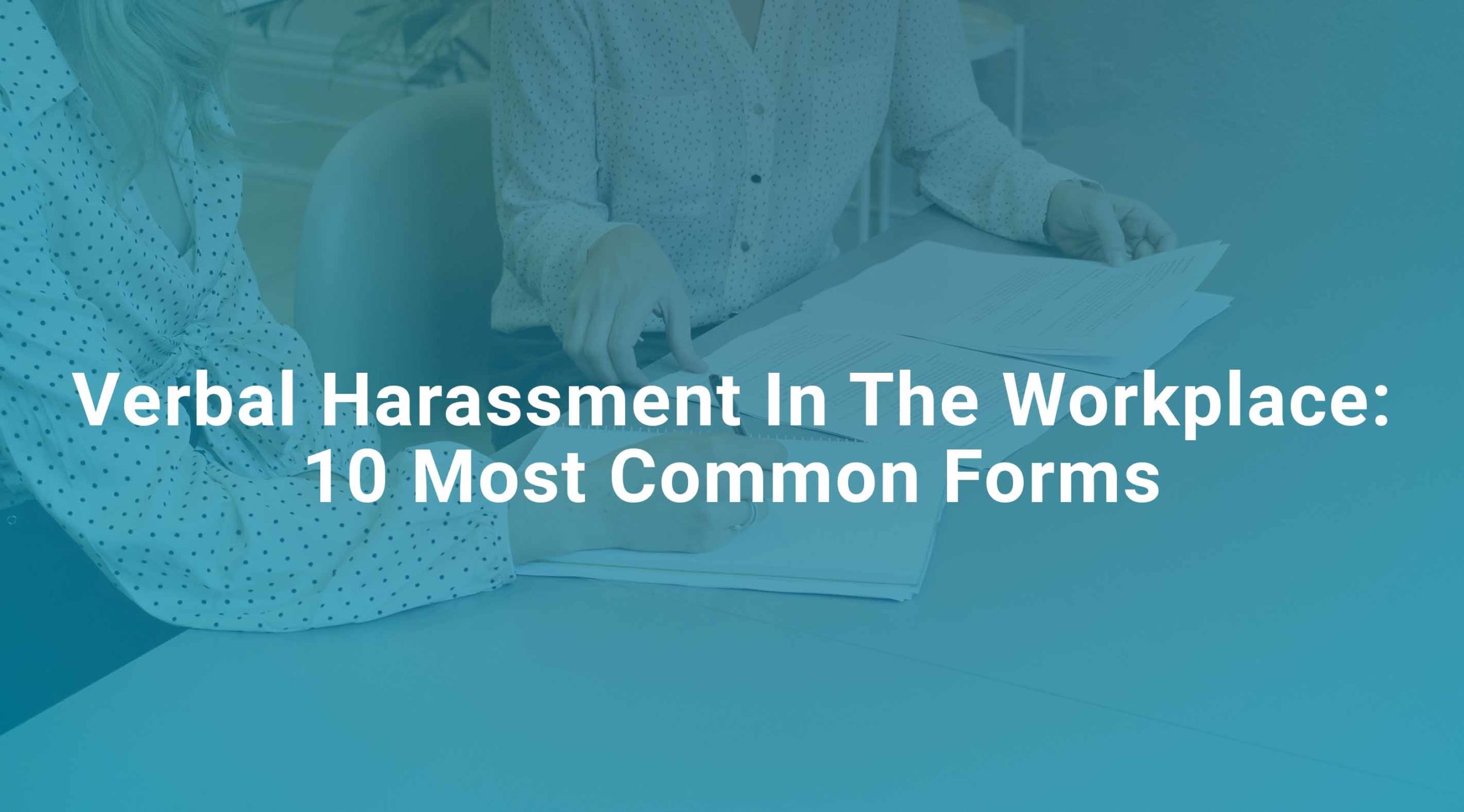 Verbal Harassment In The Workplace: 10 Most Common Forms

Verbal harassment in the workplace, is directed at a person with the intention to cause harm either in a psychological or emotional sense. People do it through various ways like calling that individual names, making the person feel unwanted, and diminishing his or her self-worth. However, unlike physical harassment, it is difficult to collect evidence when filing a case of verbal abuse. In such a case, finding the witnesses or recording an abuse is the only solution.

10 Most Common Forms of Verbal Harassment

Communication is considered a common interpersonal activity and most societies have rules to govern what type is appropriate for the situation. However, verbal harassment flaunts such rules and uses words to injure the victim. Not only are these words harmful, but the fact that the abuser feels he or she can use them is more damaging for the victim.

Jokes are fun but only to a limit. If a person makes you uncomfortable with his or her jokes, they are termed inappropriate. Even someone’s remarks can sound abusive at times. The shocking part here is that this is a common form of verbal abuse.

Whenever an individual asks a person to go out with him or her in an inappropriate manner, it is considered verbal harassment. Moreover, any kind of sexual advances or favors also come in the same category.

That is another common form of verbal abuse which usually goes unnoticed. Individuals often ask the history of another person without their consent. They even go to the extent of asking about sexual preferences.

Talking about an individual on his or her back is a serious offense. Moreover, there are times when individuals often spread lies about a person they don’t like or for fun. That also comes under the category of verbal harassment.

Calling someone offensive names or using abusive language against them is another offense that comes under verbal abuse.

Individuals who comment negatively on a person’s body, personal behavior, and clothing are termed as verbal abusers. Negative comments are a common form of verbal harassment that happens almost daily.

Making sounds of kissing, whistling, or smacking lips is also considered offensive by many. That also comes in the category of eve-teasing.

Sending someone sexual letters, notes, or emails is a serious offense. Individuals often face verbal abuse of this form in various places.

Verbal attacks can be of various types. For instance, demeaning someone, using discriminatory language against that person, or threatening also comes under the category of verbal attacks.

Embarrassing people in front of others through means like yelling or shouting is also a common form of verbal harassment.

One thing that should be noted here is that the law does not consider all forms of verbal abuse or harassment as illegal. It will be considered illegal only if it is termed unlawful in the eyes of the law. In such instances when verbal harassment isn’t termed illegal, the victim has a chance to explain the situation to the alleged abuser and explain what is making them uncomfortable.

Verbal abuse or harassment can have both short-term and long-term effects on all individuals. We will now analyze the impact of the same in the points below:

The long-term effects of verbal harassment include both physical and psychological impacts on the person. Here they are:

There is no denying that dealing with verbal harassment is painful, and it must be stopped immediately. While no one can control somebody else’s behavior, there is always a way to stop the abuse. Moreover, it is important for the individual to support himself or herself when dealing with the situation.

Individuals should avoid arguing with the abusers because doing so will not change the latter’s minds. It’s normal to defend oneself when an opposite person starts hurling abuses. However, it is best recommended not to argue with such persons because that may make the abuse worse. Moreover, one also should not try explaining what the other person is saying is wrong.

The victim should tell the abuser directly that whatever is said is downright abusive. Firstly, the individual must think about what the other person is saying and why it is hurting. That will help the person determine the type of verbal abuse easily.

Sometimes a person may not know that he or she is acting abusively. So, the best thing to do is to explain the same to that person in a calm voice. Even if the person is abusing on purpose, doing so minimizes the chances of further abuse.

Reporting workplace verbal harassment is a must as there may be other complaints by fellow employees and that the employer could wait for more such responses to take action. Here are a few ways you can report verbal harassment or abuse.

Victims of verbal harassment may not recognize or deny their feelings and anxiety. Most of the time, it is done to get away from the fear of the abuser. The one thing that should be kept in mind is that verbal harassment is illegal and those who indulge in the same are subject to getting arrested at times.