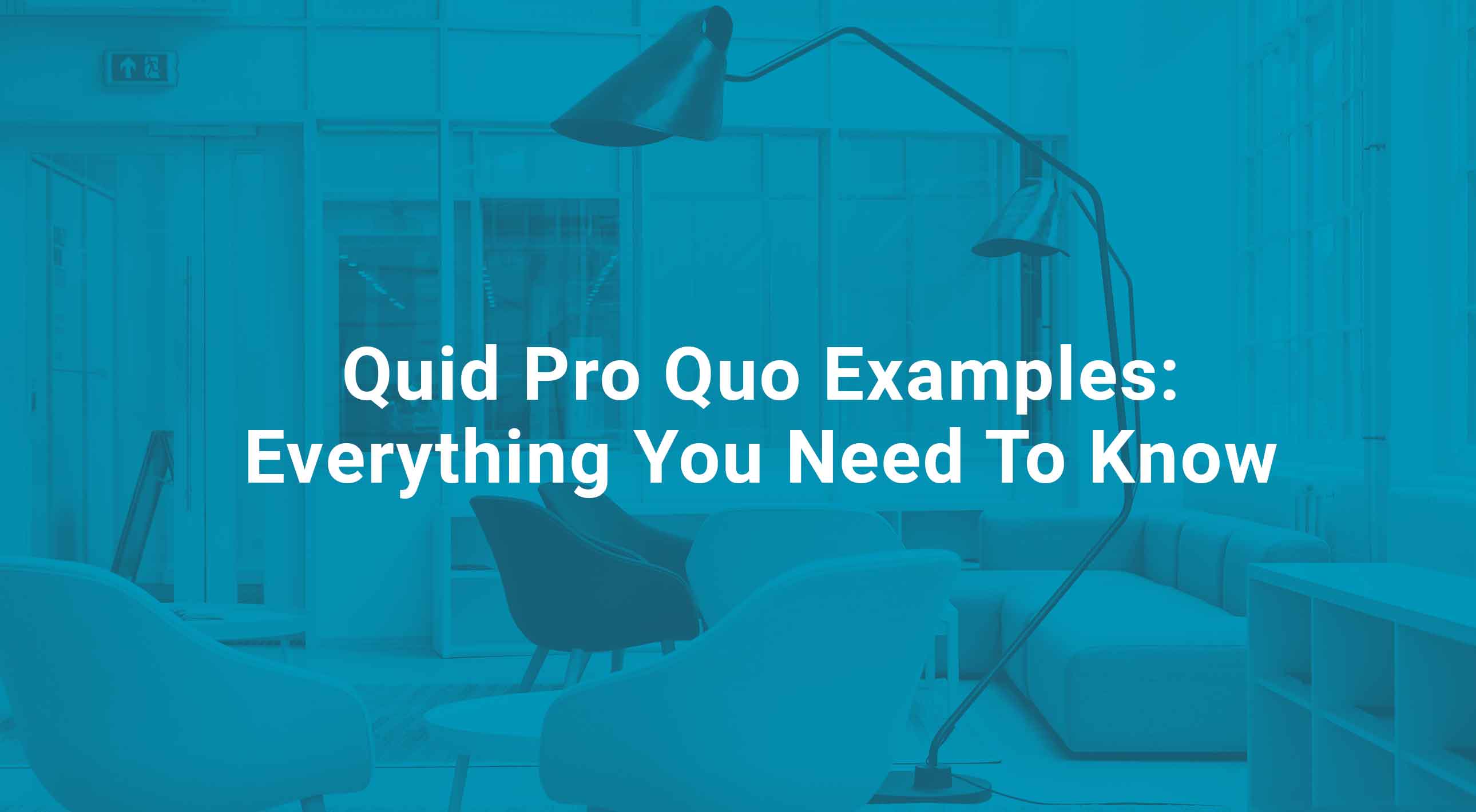 Quid pro quo examples range from covering a friend for his/her lie in exchange for him/her covering for you, to a supervisor requesting sexual favors as a condition for advancements. The most prevalent ones are quid pro quo sexual harassment. Despite widespread news reports of quid pro quo in multiple workplaces, the occurrence of such activities continues. So, it is better for organizations to know what is quid pro quo and how to avoid it before it is considered illegal.

Quid pro quo is a Latin phrase that means “this for that”. In quid pro quo sexual harassment, the harasser is in the position of authority. For instance, the harasser could be a supervisor. The harasser uses their power over the employee to initiate the bargaining process by promising job benefits or removal or a job privilege as part of the exchange.

The critical difference between a hostile work environment and quid pro quo is who is involved. In quid pro quo situations, decisions related to hiring, firing, promotion, shift assignment, salaries, etc., are based on whether the victim is receptive to sexual advances. Whereas in a hostile work environment, the employer is required t respond to complaints of gender discrimination and sexual harassment by the victim's superior, co-workers, contract workers, or even customers.

There are a lot of quid pro quo sexual harassment examples. Some of them are:

Laura goes to a job interview, where the interviewer begins to ask her personal questions which are not related to the job description. It makes her feel uncomfortable. The interviewer comes out from behind of their desk and sits on the edge of her chair, puts their hand on her shoulder, and says that if she gets this job, she will have to spend a lot of time together in a sexually suggestive way.

This type of quid pro quo harassment is more common than we think. For instance, Michelle is working in the office, and her supervisor has made his interest in her very clear, and she has consistently shut down his advances. However, he offers a promotion if she agrees to go out with him or get intimate because her supervisor thinks he is sure they will hit it off.

Kenny's boss has bought tickets to the company's yearly getaway and suggests she can pay him back later, but it must be a sexual favor. This scenario could include many other benefits like giving them a more favorable assignment or a company car.

How to Report a Sexual Harassment Case?

Report the case, and the committee will initiate the investigation as soon as possible. It would take approximately ten working days to start the investigation. The victim or the harasser will have to attend the meetings, and the company will make a final verdict based on the discussion. The action taken will notify the complainant five days after the last session. If either party is not satisfied with the decision, they can appeal to the Managing Director to reconsider and make a final decision.

The company's job is not to victimize the sufferer and not discriminate while dealing with the complaint. The victim can either apply for transfer or discuss with Human Resources regarding the transfer of the harasser. While the process continues, the complainant's identity is kept anonymous to prevent their discomfort. If some third-party person does the harassment, the company will take necessary actions. The victim has an option for a few days off or transfer to a related company's business or stay in the same department.

Businesses suffer if they are responsible for the act done under their supervision. For instance, employers in a company can be liable for sexual harassment committed by their staff members and have to defend themselves.

Here are a few things that help prevent any sexual harassment

The board and CEO of the organization should have a zero-tolerance policy against any hostile or quid pro quo harassment. They should take strict action and make it clear that the punishment for the same applies to the whole organization regardless of their title. The board should regularly review the data on quid pro quo harassment. For instance, please record how many harassment cases are reported and how long it takes to resolve the claims. The company should also approve an anti-harassment policy and include training courses related to sexual harassment in the workplace for both employees and employers.

Everyone in the organization should have a piece of knowledge about the reporting channels where they can report their issues while being anonymous. It can be challenging to investigate, but the reporter can feel safe and comfortable sharing more information.

Education has safeguarded inappropriate behavior and given the power to those who have faced sexual harassment and reported the case. Training helps build a safe community within the firm where everyone works together towards the same goal. There should be a demo session on how employees react when they see someone getting harassed in the workplace or outside.

Be responsive and include questions in the survey about whether the employees have seen an act of sexual harassment and ask whether they have reported it or not. Taking immediate actions shows the efficiency of a company's reporting program.

Quid pro quo is a severe kind of harassment that can affect an employee's physical and mental peace. Such experiences can even let the employees leave their jobs, taking their ideas, connections, and potential. It leads to companies losing their valuable assets. Harassment can great a negative impact on the cohesion and functioning of teams. Companies can lose their helpful employees if they don't work to eliminate sexual harassment.

Such incidents can be reduced by employee training, transparency, and proactive responses, creating a safe, healthy, and more productive workplace for everyone.