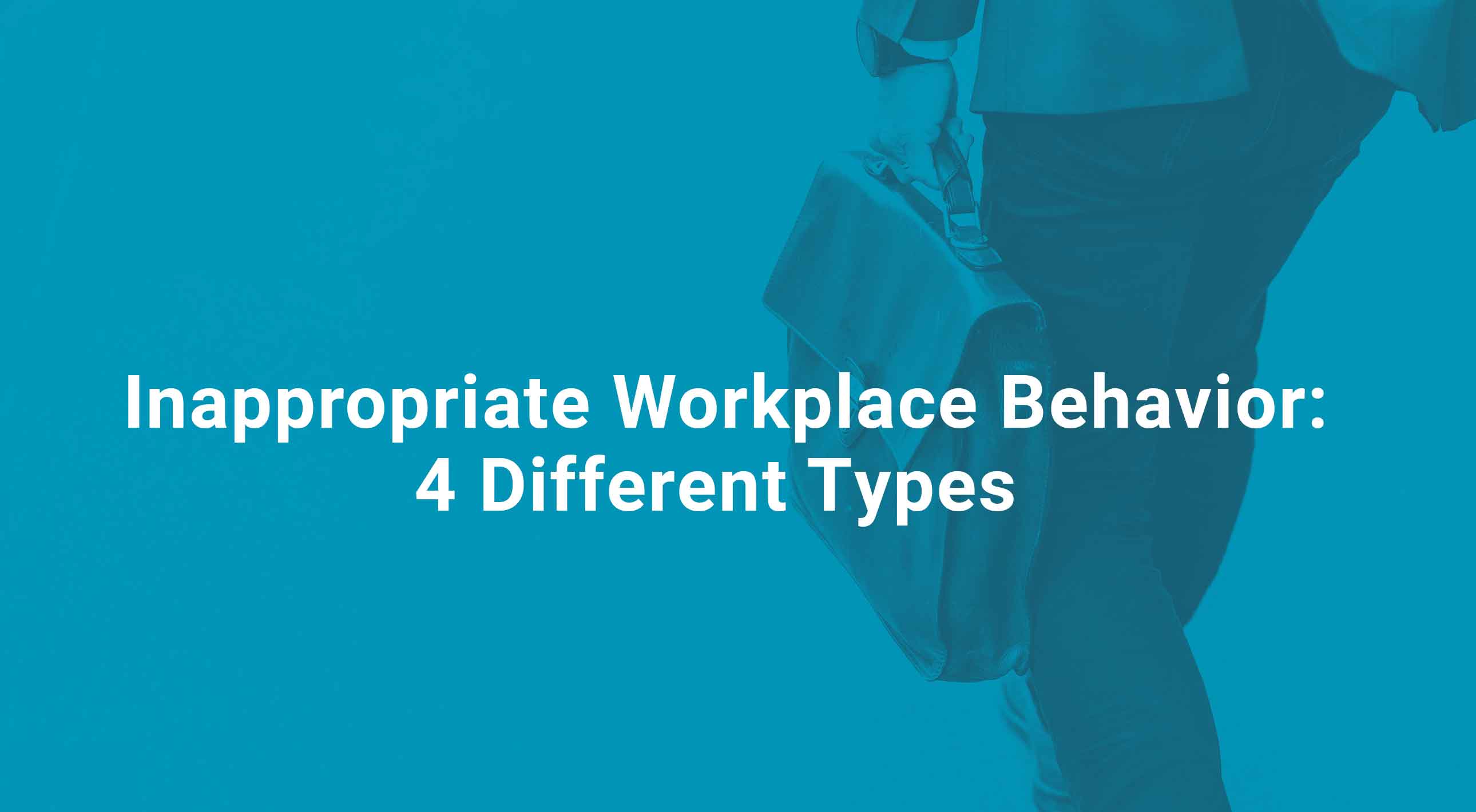 According to a poll conducted by NPR and Ipsos on workplace behavior, 1130 American adults have complaints or objections regarding the work environment. These objections to protests include:

However, while most people view all of the above-said behaviors as inappropriate in the workplace, they have witnessed them regularly. About 51% of the men aged 18 to 34 considered talking about some sexual life or personal history inappropriate. Also, 72 to 88 percent of the employees, including men and women, regarded unprofessional conduct like "girl, babe, sweetie or honey" as inappropriate.

The Most Common Types of Inappropriate Workplace Behavior

All members of the workforce are affected by inappropriate workplace behavior. There is psychological harassment of victims, and the offender makes inconsistent decisions. As they realize their errors, they may feel a growing sense of guilt, which could affect both employees. However, the most common inappropriate behaviors witnessed by employees are:

If an employee is mistreated regarding his sexual life or appearance, such behaviors fall under this category. Sexual misconduct includes both sexual harassment and sexual assault in the workplace. Examples of sexual harassment may include:

Bullying is a form of aggressive behavior in which someone causes another person injury or discomfort repeatedly. There are several forms of bullying that can be physical, verbal, or more subtle. The following are examples of workplace bullying:

Discrimination against a person based on their personal characteristics is illegal. Regardless of the reason, it is unlawful to treat someone less favorably than others. This includes how they are treated in the workplace, in connection with a job application, or even after leaving their job position. Some most common practices include:

An organization and its employees can suffer significant consequences if their behavior is inconsistent with basic professional and collegial expectations. This can also increase an organization's potential legal liability.

Teamwork and civility in the workplace lead to high morale, productivity, and customer service, boosting profitability. Unfortunately, this is not always when workers engage in inappropriate or disruptive behavior. Some most common practices include:

How Do You Manage Inappropriate Workplace Behaviors?

An excellent place to start is introductory training in conflict resolution and people management. Supporting your managers with the resources they need to succeed can give them the self-assurance they need when dealing with challenging personnel. Also, workplace personality testing modules can be used by some businesses to help their employees identify that they may have various working styles and distinct tendencies in how they interact with one another.

When these scenarios develop, be extremely precise about who to contact and what to document. A proactive approach to coaching employees about inappropriate behavior can often prevent situations that escalate to a hostile work environment and illegal harassment.

Maintain a clear understanding among employees about what is and isn't acceptable behavior in the workplace. It is possible to prevent a scenario by simply stating one's expectations upfront in many cases. In addition, employees should be allowed to confront their management without fear of repercussions if they notice inappropriate behavior. Finally, consider educating your employees on how to go about bringing up improper conduct.

A better working relationship can be achieved by encouraging meaningful collaborative activities. Workplace personality testing modules are used by some businesses to help their employees identify that they may have various working styles and distinct tendencies in how they interact with one another. One of the best ways to ease tense situations is to realize that one's own style and tendencies are just as valid as those of someone else's opposite.

The best managers will begin to pay close attention to what's happening when unacceptable behaviors emerge, rather than just turning away from problems they'd prefer to ignore.

Workers may be less likely to spread rumors or undermine their coworkers if the company's management team has a reputation for honesty and accountability.

Often, gossip and backbiting in the workplace stem from a lack of openness in management. Share company information with your staff if possible, and pay attention to their problems.

Employers are prohibited from making employment decisions based on an employee's protected class status, but basing decisions on performance helps avoid the appearance of a breach of these regulations.

When an employee believes they are being discriminated against or harassed, focusing on performance helps retain the emphasis on the genuine employment issues at hand, keeps the employer compliant, and shows respect for employees and coworkers and their rights in the workplace.

Efforts are not limited to the physical and psychological threats present in the workplace. An employee's inappropriate behavior can negatively affect a coworker's emotional and physical health. Defining undesirable workplace behavior is essential before you can feel comfortable confronting it. When dealing with and preventing unprofessional behavior at work, prevention generally surpasses treatment.