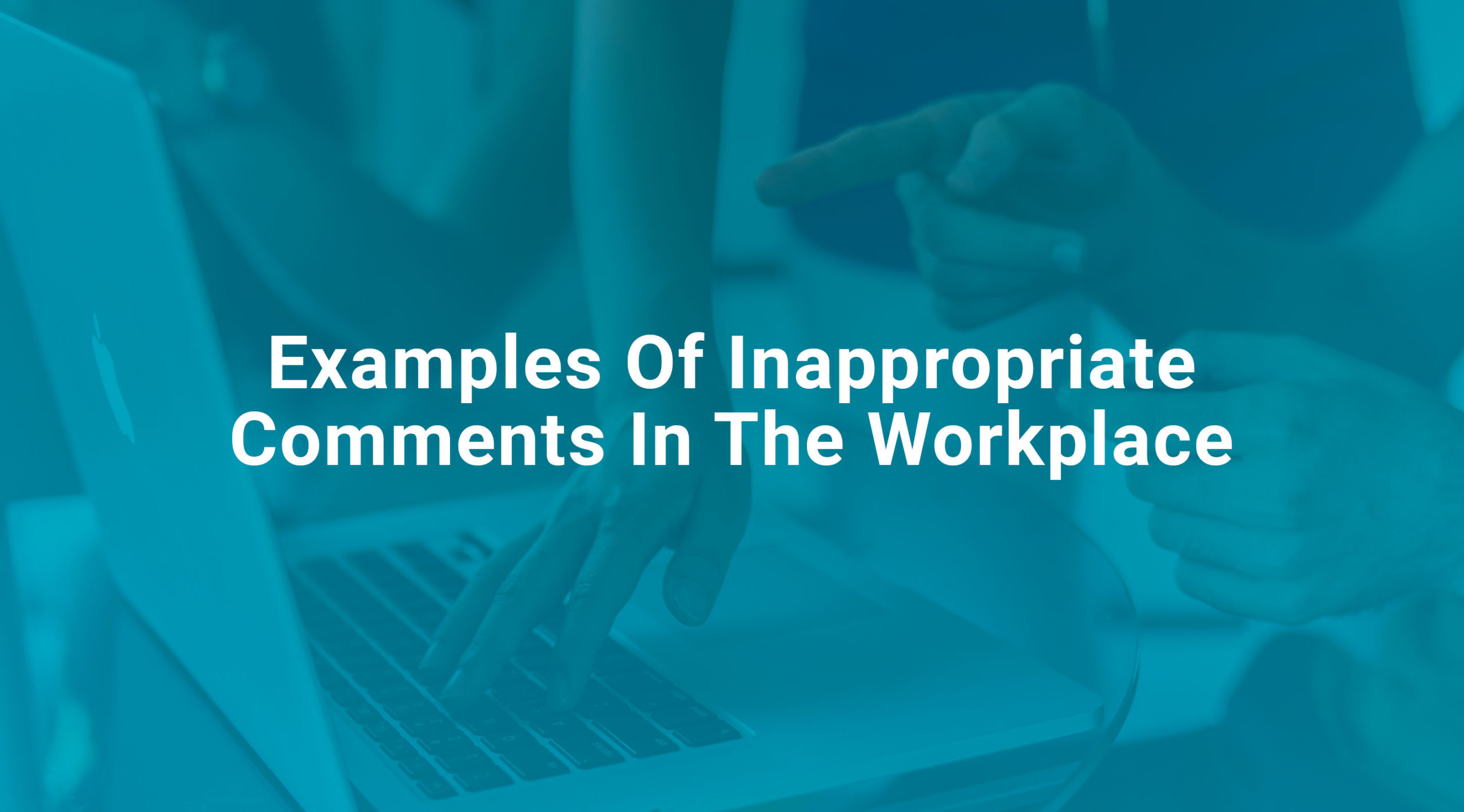 Examples Of Inappropriate Comments In The Workplace

Understanding common examples of inappropriate comments in the workplace

While the criteria on what is appropriate for the organization can differ depending on your workplace culture, there are always some offensive comments that people think inappropriate.

Even when individuals in an organization can discuss sensitive matters and offer positive criticism to others, humiliating and taunting others or making intolerant comments is not acceptable workplace conduct. In addition, it is further crucial to have a tolerant environment and avoid making stereotypes about groups based on sexuality, gender, political affiliation, religion, or race.

An important aspect of working in a collaborative workplace is communicating with others and adding to a productive and positive environment. However, sometimes, people make comments during workplace discussions that are not appropriate for professional places for numerous reasons.

It is important to address inappropriate comments in the organization to ensure every employee feels safe and comfortable communicating as a team.

Tips to address inappropriate comments at the workplace

Below are some ways to handle inappropriate comments in the workplace.

When a person makes a harsh or prejudiced statement directly to you or overhears a discussion in the organization, you might become furious and emotional about dealing with an inappropriate comment at work.

However, it is better to work through the sentiments about the problem before addressing the case to ensure that you approach the conclusion in the most effective way possible. It can involve moving out of a room or having some fresh air and thinking about the issue for a moment.

Before taking any measures, it is better to consider how much annoyance the inappropriate statement poses in the company to determine what action to take. While some offensive comments may need a simple personal discussion, others require severe disciplinary measures from management or EEOC (Incase the management overlook your concern).

In addition, if a colleague jokingly offends you but you think they had no malicious intentions, consider asking them about the remark at that point or having a personal discussion to present why their language was inappropriate.

Furthermore, if you hear a coworker making prejudiced comments and being deliberately abusive regularly, reporting them to management is vital in order to keep the workplace secure for everyone.

Think about your position in the company and your level of accountability for managing inappropriate comments. If you are a supervisor or team leader, you must set an example for others that model ethical business values and handle unacceptable conduct in your group.

On the other hand, if you have an entry-level position, you may want to seek the aid of a manager or human resources professional to approach a higher-level workforce about their inappropriate remarks.

If a person makes an inappropriate remark during a professional discussion, you can begin by diverting the topic. It lets you remain on task and allows you to approach the person later to have a genuine dialogue about the comment if appropriate and refocus this discussion.

One of the options for addressing an inappropriate remark is to invite the person for a private discussion with you. While you can also address the comment instantly after making it, waiting for a personal interaction gives you time to think about what you want to say about this issue.

In addition, if you're comfortable speaking to them, you can utilize this discussion as a chance to enlighten them about appropriate workplace conduct and hopefully enhance your working association with the person in the future. Ask them if they have some time to discuss the issue privately, away from any distractions.

Mention the inappropriate comment and ask what the person meant when they expressed it. Asking about the other individual's intentions can assist in avoiding any misunderstandings and offer them the benefit of the doubt.

In addition, knowing their intentions and being empathetic that every person makes mistakes can help you come to a successful solution. You may be capable of assisting them in realizing that what they said was abusive and be more considerate in the future.

Describe why the comment is unacceptable, and summarize how their remarks impacted you or others. Explaining how you responded to the statement and how it made you feel can present another viewpoint and assist them in thinking analytically about what is appropriate to communicate in the workplace.

Concentrating on how the remark impacts others or causes problems in the workplace can present direct evidence of why they need to adjust their behavior and control similar comments in the future.

Define the measures you want them to take or potential solutions to fix the issue. It can vary from simply abstaining from making similar statements in the future to issuing an apology letter for the inappropriate comment.

More severe problems may need solutions like diversity and unconscious bias training for the workforce. It can assist in stating that you understand that everyone wants to cooperate successfully and has the same objective of building a secure and comfortable organization.

When discussing the inappropriate remark, speak about the comment itself instead of judging the individual who remarked. It lets you remain neutral and objective while consulting a severe issue, especially when handling a statement in a group setting.

For instance, a person may be more open-minded if you say "that statement is a rude stereotype of females and not suitable for work" than if you state "you're sexist." The initial sentence points out the issue with an expression, while someone may notice the second phrase as a personal attack.

Closely consider how a person reacts when you approach them about an unacceptable comment. However, if a coworker continues to make lewd remarks, you need to escalate the issue to the upper management. Furthermore, you can report the incident to the EEOC (Equal Employment Opportunity Commission) if the upper management does not take any action.

In addition, it is important to record repeated incidents of improper remarks, especially if they add to workplace prejudice or a hostile organization. Try interacting with the individual first, but be proactive about taking a stand for yourself and others to foster a healthy workplace.

In a nutshell, employees must identify when offensive comments constitute workplace harassment to better report the incidents. In addition, the organization administration should remain equally considerate and make a safe work environment for their workforce.