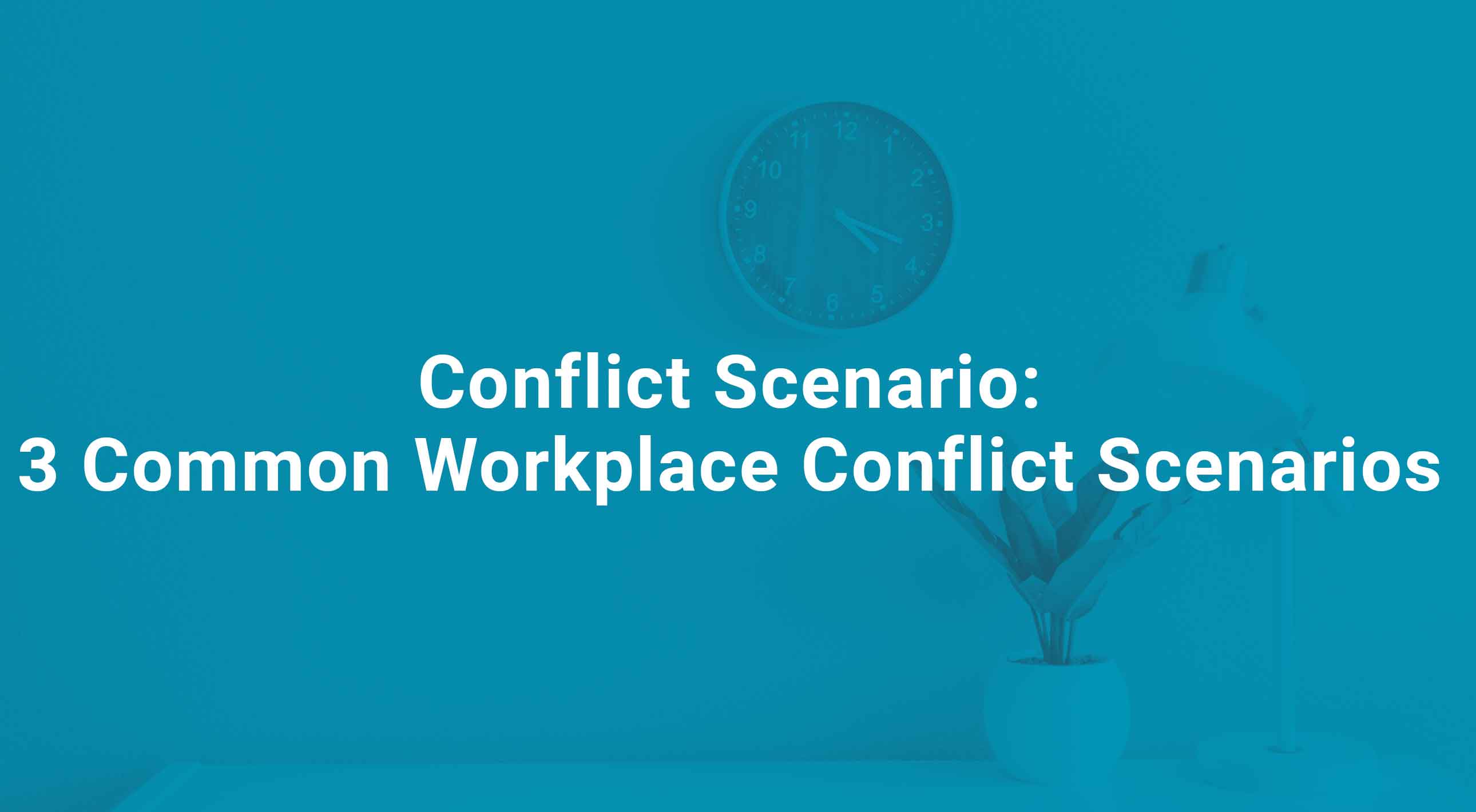 Conflict scenarios occur when coworkers and subordinates can get into disagreements, disputes, or even fights with each other or with their supervisors in any organization. Poor productivity, attrition, or even violence can come from workplace conflicts. Therefore, the primary managerial obligation is to resolve a problem quickly.

Every leader, regardless of skill or experience, must deal with conflict. As a result, complaints, conflicts, and problems will constantly arise that need to be addressed.

Learning to deal with disagreements to promote a more positive work environment is essential.

It is your responsibility to improve your emotional intelligence and awareness to foresee, address, and solve difficulties. You can take advantage of the chance to build a firm with a healthy culture that benefits everyone by knowing how to deal with disagreements effectively.

What are the Common Workplace Conflict Scenarios?

At a leadership level, disagreements can arise, whether amongst managers or between a manager and a subordinate. For argument, let's imagine that two teams led by collaborating leaders adopt two quite different management methods. Everyone in the workplace will be affected if the two managers can't work out their differences. Conflict can also arise when employees don't know how to effectively voice or report their concerns about a manager's leadership style.

Additionally, a manager who receives insubordinate behavior from an employee who does not match the disciplinary criteria for such behavior should be disciplined. These situations can lead to conflict if the stress of the interpersonal battle is combined with a lack of motivation to resolve it.

Conflict resolution between employees and managers without HR involvement is critical, especially if one party is assumed to have the leadership abilities to handle the interpersonal issue independently. For those who are unable to resolve the conflict without bias or fear of retaliation, seeking professional conflict help or bringing the matter to the attention of human resources may be the best course of action to take next.

Employees have to work together, which implies they may have to rely on their coworkers' work quality and speed. However, if you've ever worked in a group, you know that everyone has a distinct working style. Workplace stress can ignite tension amongst coworkers when they are under time constraints, a customer is on the verge of canceling their order, or a deadline approaches.

Working in a vacuum isn't the best solution, even if it is a regular workplace dispute. To put it another way, good teamwork can have a significant impact on the future of a business. However, if leadership notices that different work styles are causing tension, they should intervene.

The best method to keep everyone on board is to allow each party to submit their own views as a compromise, which also puts things into perspective. If handled correctly, as long as it is handled correctly, this type of conflict can be transformed into productive conflict in the workplace.

Even if a coworker's color, religion, gender, sexual orientation, or cultural background isn't an issue, the company's leadership will want to get to the bottom of it as soon as possible. Creating a work environment where no one feels harassed or discriminated against because of their distinctiveness is essential to preventing costly problems for the organization.

If you're wondering how to handle staff conflict around cultural differences, try teaching employees about diversity and implementing an effective reporting system for issues that can help reduce instances of conflict. Of course, avoiding workplace issues is a minor benefit of diversity training. However, your firm can reap numerous advantages by addressing issues of diversity and inclusion. Staying on top of frequent workplace conflict scenarios might help you avoid problems before they arise.

1. Employee Complaints of Harassment or Discrimination

Although the number of complaints has decreased due to increasing awareness and training, thousands of people still believe they have been discriminated against even though fewer complaints have been submitted in recent years.

Defendants frequently claim that they were subjected to the following:

Be careful not to take it for granted as a sign that you focus on the essential things. Management should be allowed to discuss potentially emotional matters with management, and bad actors will not be tolerated.

By making it clear that discrimination of any kind is not tolerated in the workplace, everyone can relax and do their best work. In addition, a discrimination claim will be less likely to be launched against you if concerns are handled correctly.

Another common cause of conflict at work is disagreements over who should be held accountable for the actions of the person named in the complaint. Human rights law prohibits discrimination or harassment based on a person's race, ethnicity, religion, or gender (including pregnancy and transgender individuals) (including family medical history).

Many factors contribute to underreporting of sexual misconduct in the workplace. For example, research conducted in 2019 found that 38 percent of women and 14 percent of males have been subjected to sexual harassment.

Sexual harassment can occur in various ways, including unwelcome approaches to sexual action, requests for sexual favors, comments or nonverbal clues, vulgar gestures, and explicit/inappropriate electronic messages or photos. Furthermore, the following are the causes that can contribute to giving birth to a conflict scenario.

2. Communication was Sloppy and Resulted in a Blunder

Many people still work from home today, with 42 percent of the workforce in 2020. This is a critical issue that has to be addressed quickly. In addition, communication challenges must be dealt with head-on in today's scattered workforce and face-to-face interaction period.

3. There's a Conflict Over Work Styles or Personalities

Coworkers with various work styles, personalities, or preferences may put you in the position of becoming a mediator. Even though most studies show that differing points of view lead to greater outcomes, disagreements are virtually always a given.

4. Each Department has Its Own Agenda

Many companies deal with a problem known as "the silo effect," which occurs when the various departments and teams within an organization do not communicate effectively with each other. This can lead to a lack of cooperation, low productivity, and conflict.

How to Handle Workplace Conflicts?

Here are a few effective measures to handle and resolve workplace conflicts.

Conflict is inevitable. So it is better to manage it than to shy away from it. As a leader, it is your duty to tackle the issues fairly and quickly.

When someone approaches you with a discrimination or sexual harassment complaint, listen to their story with an open mind. Treat the employee with respect and compassion so they feel 100% comfortable sharing.

When handling conflict, listen and try to put yourself in their day-to-day position to get a true sense of what has motivated the issue.

It is up to senior management to create a happy, healthy, and conflict-free work environment. Group activities, days out, well-being workshops, and team lunches can be more effective. Organize training to explain conflicts and how to handle them and other workplace issues.

Learning how to resolve conflicts is an essential element of being a successful leader, especially if you have to deal with discrimination, harassment, poor communication, or divisions within your department.