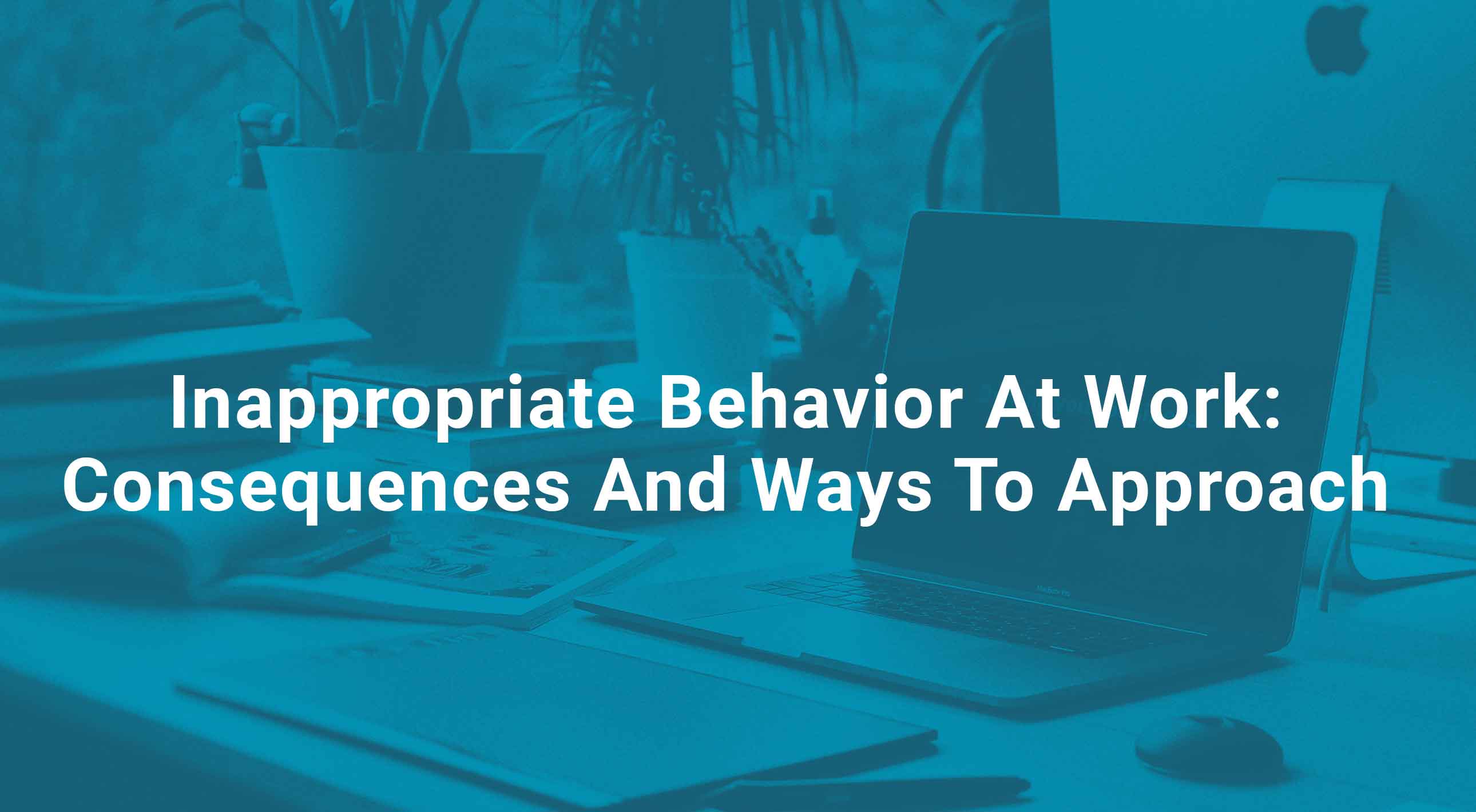 Inappropriate behavior at work, such as bullying, discrimination, or sexual harassment, can negatively influence employee morale, reputation, and business operations. Not to mention that these types of claims can be costly, especially if mismanaged. Even though all employees are expected to conduct themselves professionally and treat each other with respect, this is not always the case.

What is Inappropriate or Aggressive Behavior?

In the workplace, aggressive or violent behavior is unacceptable. It can hurt the culture and environment in which the employees work. Despite the prevalence of stress in the workplace, employees should be aware of the dangers of stepping over the line into aggression and violence. Screaming at coworkers, throwing objects, or slamming desks and walls are all examples of unacceptable workplace behavior. Besides the fact that this can cause damage to company resources and intimidate colleagues, it also falls under the definition of bullying and should not be allowed to continue.

What Are the Consequences of Inappropriate Behavior in the Workplace?

Inappropriate behavior could harm your business and your ability to recruit new employees, and preventing it is the only viable option.

What Can You Do to Prevent Inappropriate Behavior at Work?

Before deciding how a company should deal with inappropriate behavior in the workplace, we must first consider what companies can do to prevent such behavior. Employees will no longer have the excuse that they "don't know" what they're doing is wrong if their employers establish clear guidelines for acceptable and unacceptable behavior. All employees should be made aware of and reminded of these values regularly to know what is expected of them concerning the inappropriate behavior.

There are many different ways people may view inappropriate behavior, and it's essential to think about all of them when putting together a guide. A non-disabled employee compiling a list of unacceptable behaviors may not include behaviors that a disabled employee considers essential. This is by no means a comprehensive list of inappropriate workplace behaviors. You should have it as part of your risk assessment to be as relevant to your company as possible.

Incorporating information about the types of behavior that your company will not tolerate during the induction phase will demonstrate to new employees that your company is committed to prioritizing and practicing appropriate workplace behavior. Companies should also promise verbally and in writing to protect their employees from coworkers, customers, and clients. Because bullying and inappropriate behavior can occur at any level, from junior staff to senior management, there must be a transparent reporting process.

Approaches to Disciplinary Action in the Workplace

Priority should be to de-escalate a situation when confronting an employee for inappropriate conduct in the workplace. You may have received a report of unprofessional behavior after the fact. Still, if it is an on-the-spot situation, you want to diffuse it to understand it better. Whenever possible, try to move the parties involved away from the scene of an incident, which can disrupt aggression or violence. Once the tension has subsided, it's much easier to see the big picture and rationally discuss what happened.

It's essential to think about whether or not the employee in question is acting out of character when confronting inappropriate behavior. Make an effort to find out if the person misbehaving has a personal issue that could cause their behavior. It's not an excuse, but it can often explain a staff member's unusual behavior if it's out of character for them to do so. If someone is being aggressive at work, try talking to them to find out what's causing it.

You must keep your eye on the prize. Is this person aware that they've done something incorrectly? An outcome may be different if you can prove a person intentionally crossed a line in a way that goes against your company's values than if they crossed the line unintentionally. Is it possible they didn't know what they were doing was wrong? If you're a business, you can learn from that and use it to build your company code of conduct.

Before moving forward with a complaint of this nature:

Communication and support are essential at this stage to ensure that the victim does not feel threatened by their colleagues or lose their job.

Employees should be encouraged to come forward with concerns about inappropriate behavior in the workplace. Even though management shouldn't expect workers to deal with or intervene in instances of unprofessional conduct, they should be aware of and confident in the reporting processes.

What Do You Have to Deliver as an Employee?

Everyone in the workplace is expected to treat each other with dignity and respect. It is the responsibility of each and every one of the MOP(S) Act's employees and parliamentarians to do the following:

According to the Work Health and Safety Act of 2011, these are your responsibilities as an employee. All reports of inappropriate behavior will be investigated promptly, confidentially, and objectively. Reporters of wrongdoing should not be punished.

A company's health and safety risk management efforts extend beyond the workplace's obvious physical and psychological dangers. Inappropriate behavior by employees can harm their coworkers' mental and physical health. It would help if you first defined what constitutes unacceptable behavior in the workplace before you can feel confident in challenging it. Prevention often outweighs cure when dealing with and preventing unprofessional behavior at work.