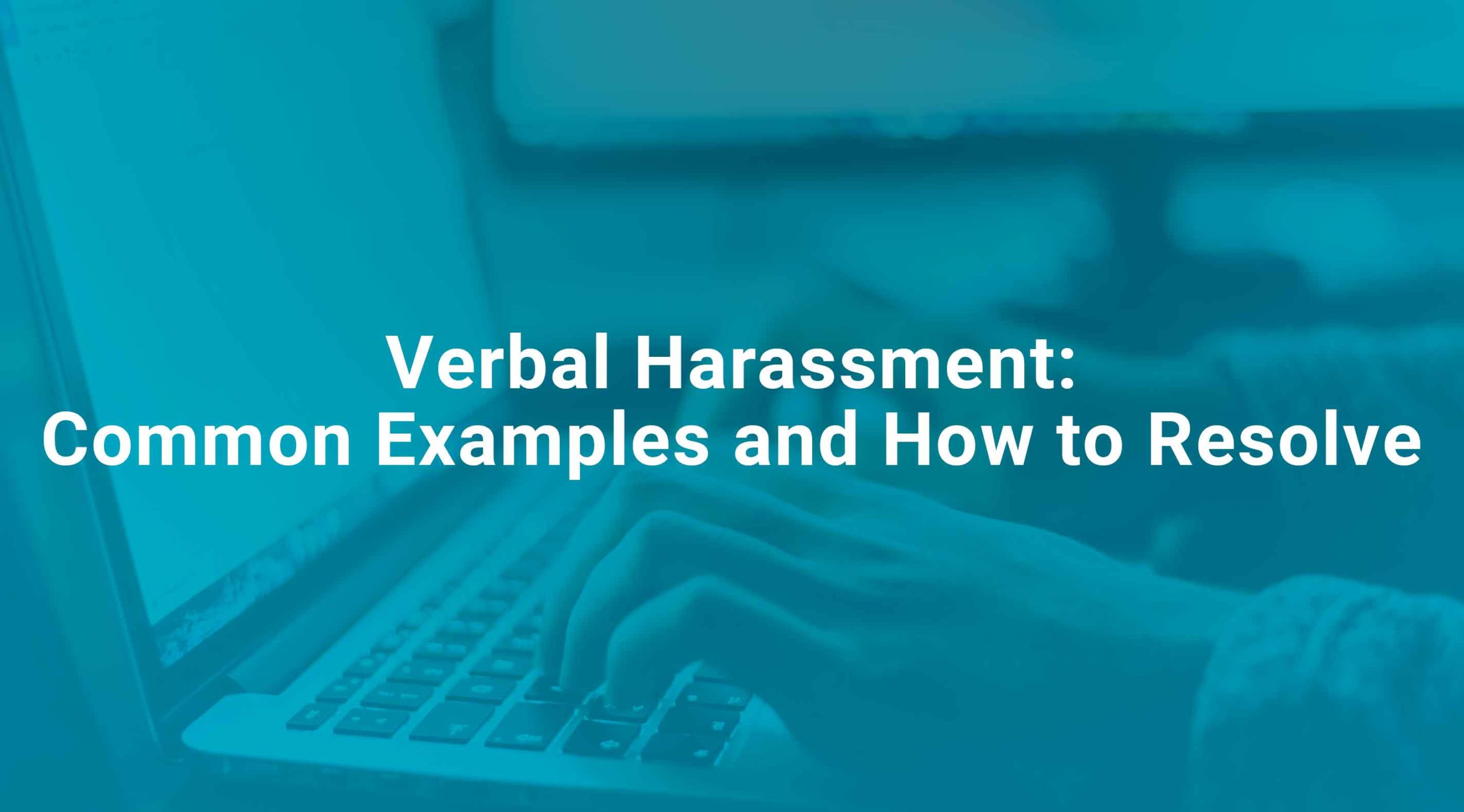 Verbal Harassment: Common Examples and How to Resolve

Verbal harassment refers to derogatory statements or oral remarks that make any person feel disrespected or embarrassed. It entails jokes, insults, slurs, calling names, criticizing, and more that might negatively impact an individual. The issues of verbal harassment are all-time high in corporate organizations across the globe. Also, despite the government's measures to lower verbal harassment in the workplace, it still exists.

Verbal workplace harassment has become a pressing concern for modern organizations that demands immediate attention as it consistently inhibits the victim's mental health and lowers their morale and productivity. Verbal harassment in a workplace can come from different sources, including coworkers, managers, or bosses.

Apart from that, verbal harassment also includes microaggressions, a type of harassment where an individual receives ongoing hate statements regarding age, religion, sex, or any other issue that can impact a person mentally. So to avoid such situations of harassment, the Civil Rights Act makes it unlawful to discriminate against employees at work based on personal traits.

In addition, organizations remain restricted from discriminating against or estranging workers based on their nationality, race, ethnic origin, or religion. The reason individuals in a company must steer clear of such cases is they often become sources of verbal harassment or bullying and may also lead to sexual misconduct. This type of harassment remains outlawed in all circumstances, and an employee can employ legislative and judicial efforts to battle it.

However, you must understand that disputes, or even heated discussions, might happen in an organization, and this would occasionally not comprise verbal harassment at the workplace. Some of the actions that verbal harassment includes are deplorable gestures, demeaning statements, and unjustified fuss.

Abuses, personal digs, undesired sexually offensive "jokes," and upsetting ungracious comments are additional examples of verbal harassment. Since verbal harassment cannot get proven readily or documented, this is often a gray area that goes unnoticed and usually results in problems, such as anxiety, raised blood pressure, and tension.

One of the multiple indicators of verbal harassment at the workplace is hiding a detrimental comment as a joke, something many individuals are oblivious of at the moment. Many people think that an individual who feels insulted is excessively insecure and sensitive.

However, this is not the case, as hateful comments in the form of jokes are a pressing concern. In addition, according to a report, around 13% of women in organizations were the target of humiliating remarks regarding their appearances or clothing choice, whistling and provocative glances.

Racial slurs, harsh comments regarding a person's ethnicity or skin color, or the display of racially abusive signs are all instances of verbal harassment. For example, racial harassment is joking or evaluating a person based on their race or speech, creating malicious or offensive work conditions and resulting in an unfortunate employee's job performance.

Every event of name-calling is a kind of verbal harassment. In addition, even if the terms spoken remain neutral, this is not a suitable way to treat any other person. Additionally, critical, sarcastic, or mocking statements planned to put a person down are also examples of verbal harassment. These might be comments on how an individual talks, dresses, or a person's capability. Practically, shaming is any comment that makes a person feel inferior or undeserving.

Humiliating based on ethnicity, caste, career level, or education is yet another step to harass a person verbally. The abuser's comments might be sarcastic, dismissive, and hateful, making someone feel bad about himself.

Outright threats might direct to an upsurge in verbal harassment. These threats usually terrify individuals into accepting what the other person is saying, and it can be both personal and professional.

Accusing individuals by being envious or simply trying to cause a problem also comes under verbal harassment. In fact, it might compel a person to wonder if they are doing something inappropriate.

Verbal harassment can occur both in private and public. While this verbal harassment is not illegal, it is banned in the workplace when mixed with sexual wrongdoing or prejudice.

Dealing With Verbal Harassment in a Workplace

By documenting the conduct, the victim can readily report instances of verbal harassment. Maintaining a history of improper conduct is valuable for judicial proceedings and any measure by the organization.

In fact, by documenting the wrongful conduct, a counselor can show the concrete timeline of the harassment. Furthermore, most businesses fail to deliver justice to the victim of verbal harassment due to a lack of proof.

Address the harassment perpetrator and communicate that they crossed the boundaries. In addition, calling out the perpetrator allows the person to comprehend that their conduct is undesirable. It can usually put a halt to such demeanor at the workplace.

The victim might choose to report the conduct to the Human Resource manager at the workplace or seek judicial proceedings. In such circumstances, the individual concerned must have a backing. Today, most organizational policies got upgraded to comprise severe consequences in verbal harassment at the workplace.

The victims can file a complaint against the perpetrator at the Equal Employment Opportunity Commission (EEOC) or an equivalent regulatory body. It assists in resolving the claim with the organization, failing which the victim has the privilege to file a lawsuit against the business.

In addition, always keep in mind that when dealing with the issues of verbal harassment, you should never retaliate or discuss the problems with your coworkers.

Seeking legal aid from a counselor against verbal harassment is an intelligent decision. You can find legal assistance by consulting an attorney or a law firm. Furthermore, several nonprofit institutions also offer complimentary counsel when there is a case of verbal harassment in the workplace.

Apart from this, different training programs get delivered by private companies. This harassment prevention training assists in finding the core reason for verbal harassment and getting a fair view to deal with it.

In a nutshell, verbal harassment in a workplace is equally damaging as psychological or physical abuse, and organizations must not take its instances lightly. Furthermore, upper-level management and supervisors in every organization must ensure that no acts of verbal harassment go unnoticed and the employees undergo regular harassment prevention training to work in a safe, harassment-free workplace.