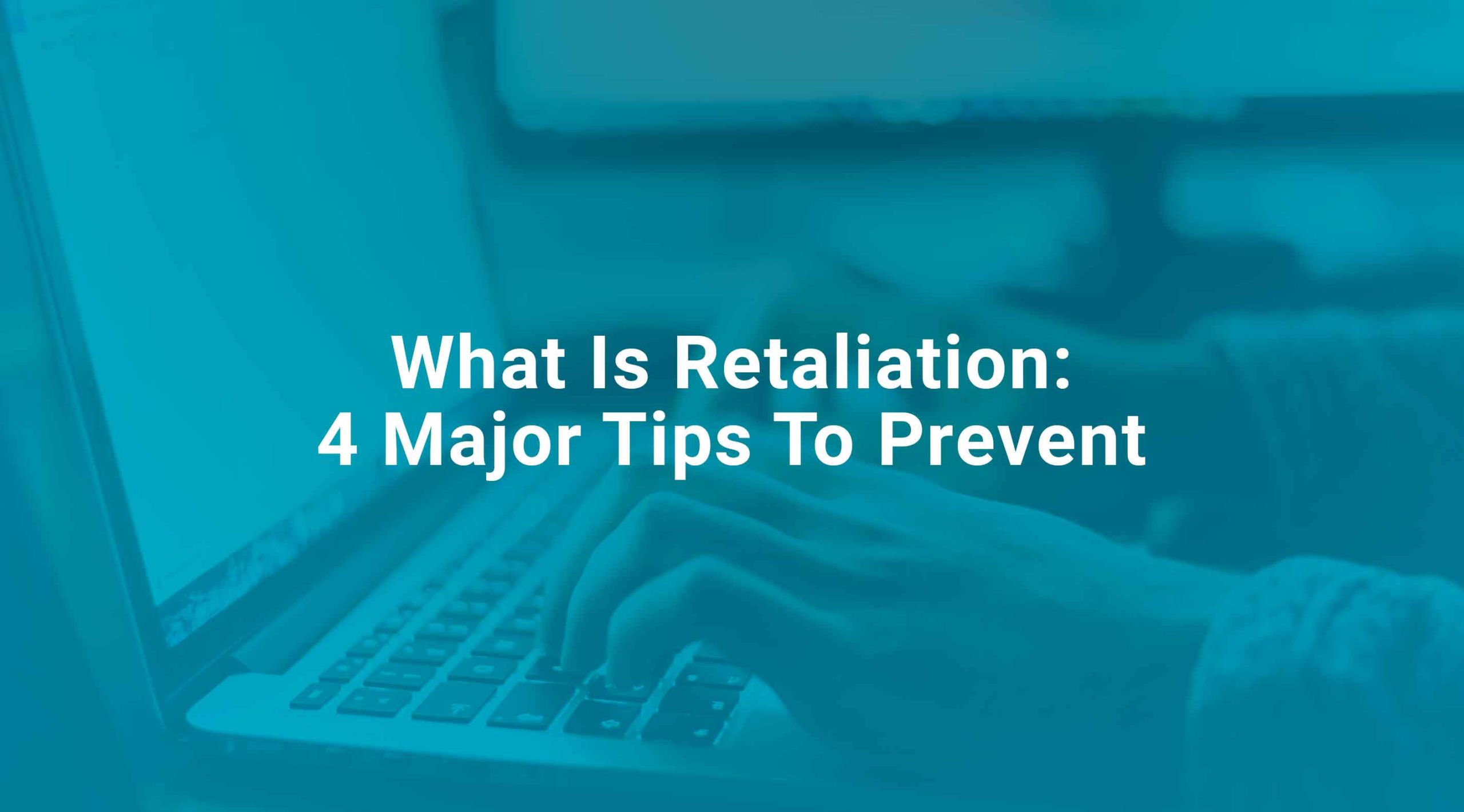 What Is Retaliation: 4 Major Tips To Prevent

Retaliation refers to demoting, firing, or harassing an employee in a workplace or individual because they registered a complaint of discrimination, took part in an investigation into prejudice, or have resisted bias. In simpler terms, retaliation is a situation where an employee who reports on dangerous or unlawful practices in their workplace receives punitive consequences from their company or manager.

Understanding Retaliation in a Workplace

If a worker in any organization gets unjust or unsuitable treatment from their supervisor after filing a harassment complaint at Equal Employment Opportunity Commission (EEOC) or testifying as a witness, it is organizational retaliation.

Managers, human resources workers, and other team members should get training on retaliation in the workplace to reasonably analyze if an employee is undergoing workplace retaliation, manage the problem suitably and avert any recurrence from occurring in the future.

So we can say that workplace retaliation happens when a supervisor or company administrator takes adverse action against a worker who files a legal complaint about organizational prejudice or harassment. The Equal Employment Opportunity Commission (EEOC) considers this act of registering a complaint a protected action. Since it remains protected, this act can make it unlawful for an employer or other business administrator to react to the formal complaint in a punitive or unsuitable way.

In addition, common reactions from an administrator that the EEOC (Equal Employment Opportunity Commission) thinks of workplace retaliation are:

Employer Retaliation at The Federal Level

The United States Congress has enacted multiple laws intending to end workplace retaliation. These same acts guard specific employee actions. Some examples of these acts are:

An example of this can be when a supervisor terminates an employee after they register a complaint about workplace harassment with EEOC.  Given the protections offered by these federal acts, companies remain prohibited from deterring or preventing employees from partaking in any inquiries. It is valid regardless of whether the investigation is in-house or performed by a national agency.

In addition, retaliation or adverse action further remains restricted by supervisors and fellow workers. According to federal law, it is unlawful for an administrator to fire an employee from their position in response to exercising their different employment privileges.

Prejudice retaliation is a particularly intricate form of workplace bias and retaliation. An instance of this is if a supervisor has employed or terminated a worker based only on their ethnicity. If the employee gets badly treated after they file a complaint about getting harassed or fired based on their race, the employer could remain liable for retaliation.

For instance, if a female employee complains to EEOC about getting harassed sexually at work who later gets less or no bonus is an example of retaliation. These are employer actions that are deemed unlawful because companies cannot differentiate based on gender identity or expression by inflicting benefits or work situations that result in the worker’s pay getting affected in any way.

Some of the most prevalent examples of employment retaliation comprise, but is not restricted to:

It is further essential to note that federal regulation does not penalize inaction or explain social etiquette. An instance of this would be how disregarding a colleague is not restricted and would not likely get considered an unfavorable act according to employment regulations. Four principal elements are used to define what comprises employment retaliation, and they are:

Enlighten and inform your workers and company supervisors of what comprises workplace retaliation by distinctly drafting it in a policy. In addition, you can include a section in your employee handbook that describes what workplace retaliation is and define your anti-discrimination and anti-harassment rules.

This guideline should facilitate employees to feel safe while approaching administration or the human resources (HR) unit with any harassment, prejudice, or retaliation suits.

After providing your employees with an opportunity to examine these policies and guidelines, conduct training sessions to ensure they comprehend these regulations. Hold a training session for employees that explains workplace retaliation.

Organize another session to train human resource team members on ways to address retaliation claims. Host a conclusive session that assists supervisors in comprehending how to control workplace retaliation.

After completing these training sessions, provide an authorized document stating the meeting minutes. Have every team member sign the document to confirm they took part in training and comprehend the details in the sessions.

If a manager is punishing an employee for reasonable reasons, they should document each punitive discussion with the human resource team before discussing it with the employee. Tell the supervisor to report their explanation for the meeting and have the human resource manager approve the punitive action they’re taking before they move ahead. It assists in ensuring the action taken is reasonable if an employee declares it as workplace retaliation.

The manager should write each punitive or exemplary discussion to verify that they circulated warnings before taking action. Supervisors should also collect files, emails, and projects to prove the employee had unsatisfactory work performance or exhibited unacceptable conduct. Keeping a bunch of files that explain the actions of your business managers and supervisors can be an effective way to control workplace retaliation.

To sum up, we can say that if the employee is facing retaliation in your workplace, you must not take it lightly and take suitable actions to understand the cause of this problem. Furthermore, you should speak to employees to understand another side of the story and exercise necessary measures to solve these issues.