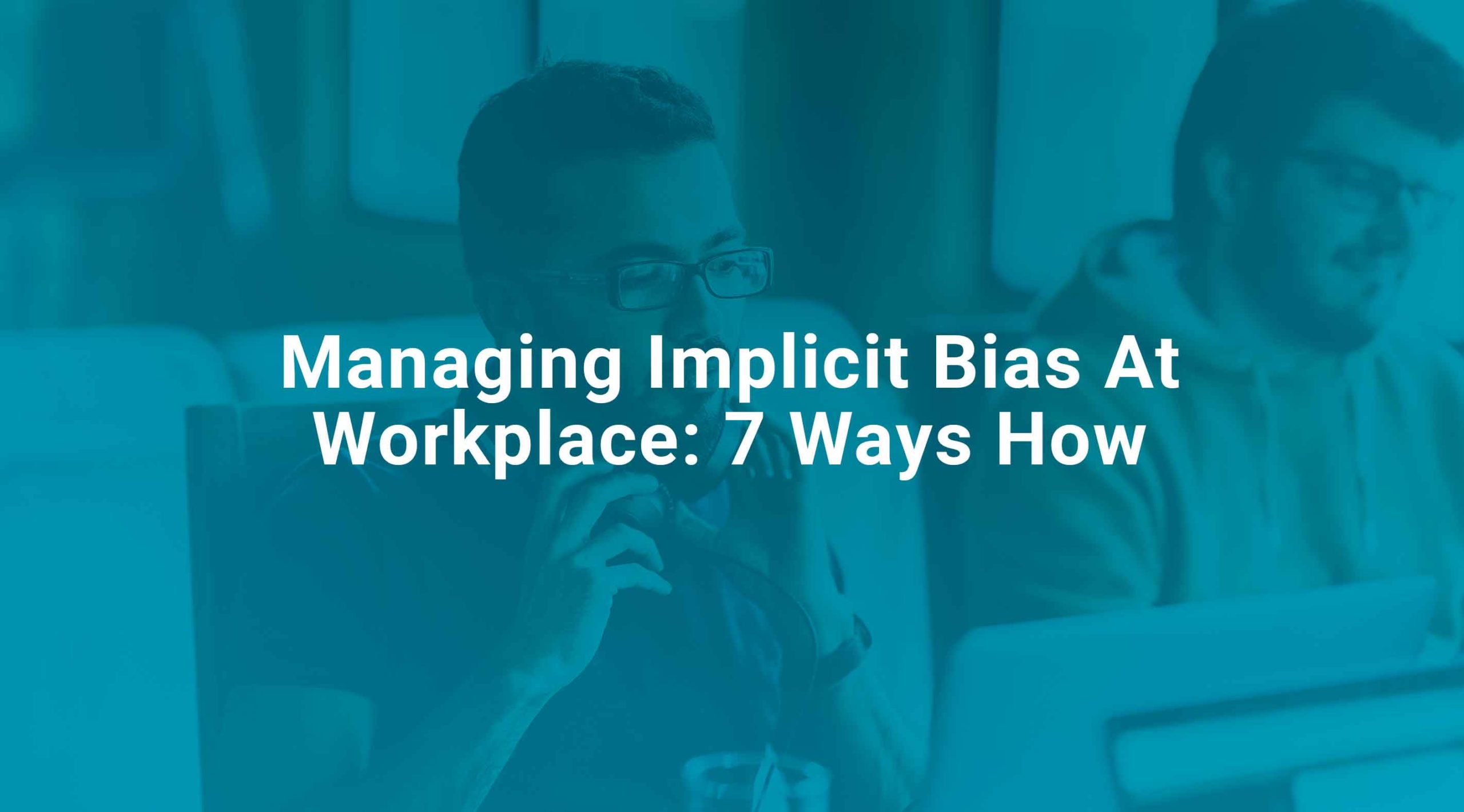 Managing implicit bias can help you become more involved in the fight against societal stereotypes, prejudice, and discrimination. When individuals in a firm are treated or addressed differently as a result of bias harbored by their companies, interviewers, coworkers, or supervisors, this is known as implicit bias. These prejudices are frequently related to underlying attitudes and preconceptions about certain people or groups.

These are mostly anchored in the individual's background, experience, or environment, which perpetuates prejudice. Implicit prejudice manifests itself in several ways, and it may have a significant influence on employees' well-being and commitment.

Is it Illegal to Have Implicit Bias in the Workplace?

As previously established, implicit bias is distinct from job discrimination, which is illegal. Implicit biases occur without our knowledge, and as a result, our behaviors are not always well-intentioned. Employment discrimination, on the other hand, occurs when we are aware of it. This implies that we are conscious of our choices. So, it's simpler to spot and handle someone who is treating others unjustly and with terrible motives.

Implicit prejudice can present itself in a variety of ways. Here are eight different forms of prejudice and how they might affect workplace decision-making and relationships.

It occurs when we favor persons who are similar to us in some manner because they are more familiar and simpler to relate to. This might be due to common interests or hobbies or similar qualities such as class, ethnicity, or location. Also, affinity bias might make us believe that someone isn't skilled or qualified for a position since we don't have the same qualities or experiences.

It pertains to the perceptions of our own and others' actions. We prefer to blame our triumphs on our abilities and our failures on circumstances outside our control. We, on the other hand, prefer to credit others' accomplishments and their failures to a lack of competence. This can lead to inequity in recruiting and performance evaluations.

This sort of bias is self-explanatory since it occurs when you form judgments about others based only on their appearance. Even though you are instructed not to "judge a book by its cover," you may instinctively choose handsome people for jobs, despite the fact that their appearance has no bearing on their capacity to perform effectively in the workplace.

It refers to the inclination to seek out data that supports our first impressions of others while ignoring information that contradicts our beliefs. Although initial impressions are essential, it's critical to make hiring and promotion choices only on relevant, accurate facts.

It refers to our inclination to make decisions based on what others say rather than using our personal, independent judgment. Having a diverse team and enabling them to express their opinions openly means bringing a broader scope of expertise and experiences to the table, thereby allowing for more inventive and well-considered ideas to emerge. It's critical, however, that people don't feel pressured to agree with others' opinions.

We constantly compare and contrast people and segregate them as per our perspective. However, comparing workers to one another, whether favorably or unfavorably, rather than evaluating them on their own merits, can cause partiality. For example, the final applicant you interview for a job may appear to be superior to all the others you've already interviewed, but you might not have come to the same conclusion if you'd interviewed the same individual first.

It is one of the most often discussed and seen kinds of bias in the office, and it can lead to discrimination charges for companies and management. Gender bias in the workplace can present itself in a variety of ways, such as a male candidate getting hired for a physically demanding position or senior women being requested to take minutes in discussions instead of males in more junior positions.

The halo and horns effect

It highlights our tendency to focus on one especially positive characteristic of someone and let the 'halo' glow of that one quality influence our perception of them in general. This might lead to our overlooking undesirable elements of a person, resulting in us hiring the incorrect individual for the job or refusing to acknowledge performance concerns or problematic behaviors. The 'horns effect,' on the other hand, occurs when we focus on a person's flaws while overlooking their favorable characteristics or accomplishments.

The company's executives are responsible for building a productive and healthy workplace. Individuals' conduct is influenced by implicit prejudices, making it harder for people of various cultures to collaborate. It's important to realize that everyone is unique and that in a complex and dynamic environment, diverse minds provide distinctive and fresh perspectives.

Although it may not be feasible to remove implicit prejudice, the following steps can assist in mitigating its impacts and making workplace decisions more equitable:

Collaborate with a broader spectrum of people and get to know them on a more personal level. This will help you gain a deeper understanding of people while also improving your cultural competency.

Our minds can only handle about 40 bits of data per second consciously, but up to 11 million things involuntarily. As a result, when we're in a hurry, our brains use shortcuts “bias” to make judgment easier and faster. Slow down and give yourself sufficient time to reach conclusions to reduce the chance of these biases influencing your actions.

Remove information from a candidate's application that might affect your hiring choice, such as name, age, location, and school name, to make a more impartial assessment of their suitability for a position based on only the most relevant abilities and experiences.

Use tech tools like Gender Decoder to see if your job postings contain inadvertent gender-specific terminology that can deter men or women from applying. For example, masculine-coded terms include 'aggressive,' 'decisive,' and self-confident,' while feminine-coded words include 'collaborative,' 'empathy,' and 'trust.'

While using AI in your recruitment can be troublesome because the information used among algorithms to make choices may represent the prejudices of those who configured it, as well as previous human judgments that it uses as data points, AI has a substantial chance to limit the impact of humans' implicit biases. Some companies are already utilizing AI's face recognition capabilities to determine if a job candidate is passionate, bored, or honest.

Take the Harvard implicit association test, for example, to become more aware of your unconscious prejudice (IAT). By improving your behavior, you may ideally encourage other coworkers to do the same.

Every business has a responsibility to help the world progress. While it is hard to completely eradicate these deep-seated instincts, we can lessen implicit prejudice in the workplace by raising awareness and implementing measures. In fact, we can assist in establishing a fairer and more equitable recruiting process and working environment by doing so. Employers may seek help from experts like GetImpactly in managing implicit bias.