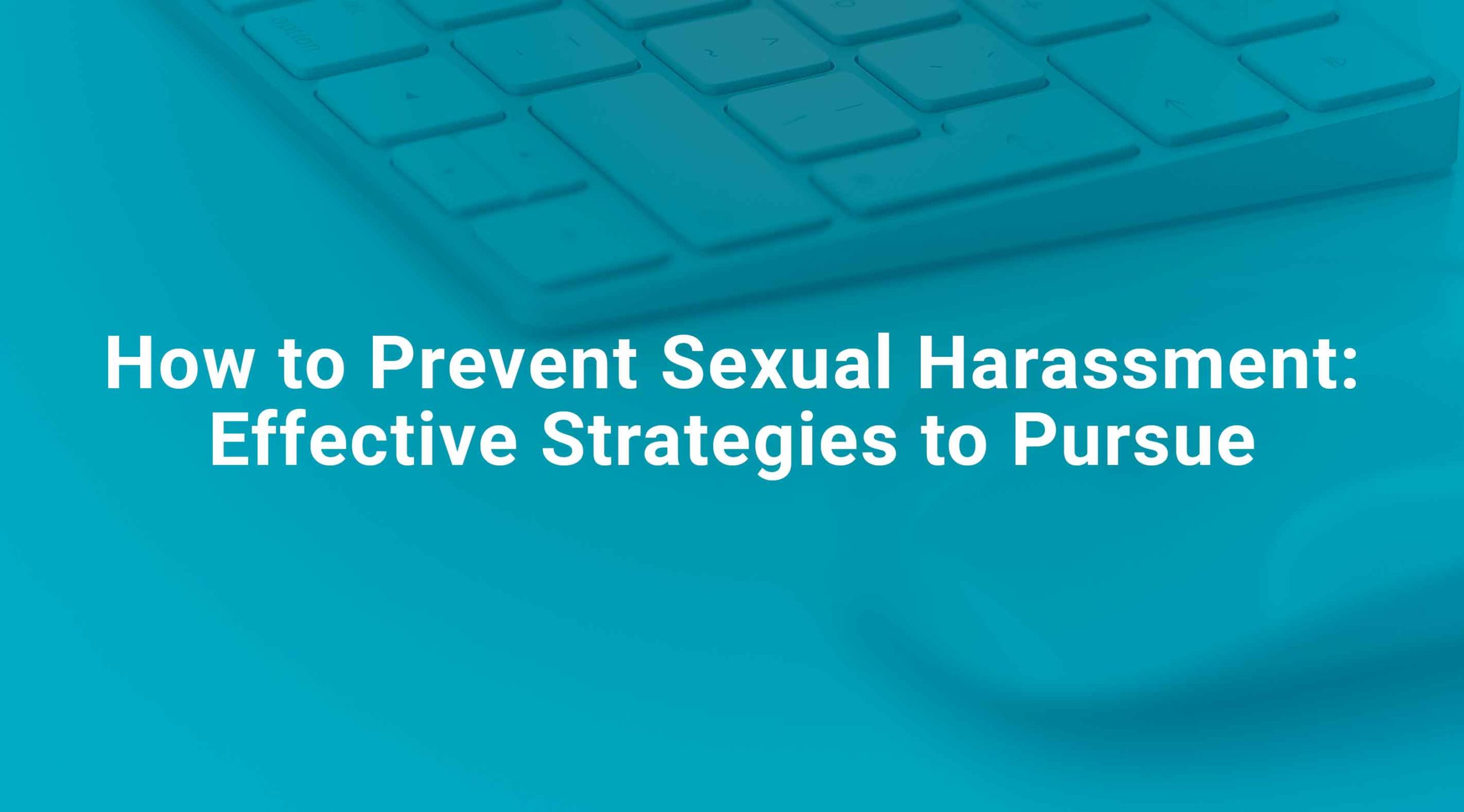 How to Prevent Sexual Harassment: Effective Strategies to Pursue

Companies should focus on how to prevent sexual harassment in the workplace. The Equal Employment Opportunity Commission (EEOC) has characterized sexual harassment as an inappropriate behavior which could be an unwelcome lewd gesture, demands for sexual favors, and any other physical or verbal conduct of sexual nature. Sexual harassment includes a large number of activities. A few of them include:

The U.S. Equal Employment Opportunity Commission (EEOC) reports that it has received over 12,000 charges of sex-based harassment, including sexual harassment, each year since 2010. Of these, 16% were reported by men. According to a survey in 2018, 81% of women and 43% of men have been harassed in their lifetime. Of the 996 women surveyed, 38% experienced sexual harassment at the workplace.

A survey conducted by TUC in 2019 showed that 68% of employees belonging to the LGBTQ community had experienced harassment at the workplace. Amongst them, 12% reported having been assaulted sexually at work. According to TUC, the misconception and over-sexualization of the LGBTQ are a few reasons for their sexual harassment.

Regardless of whether it's an attack or a lewd remark that makes someone feel uncomfortable, inappropriate behavior at the workplace should not be tolerated. Other than the emotional and physical distress for individuals involved, including witnesses, investigators, and victims, workplace sexual harassment also has a critical monetary expense attached to it. It costs an average of $2.6 billion loss in productivity.

Experiencing sexual harassment can be traumatic for the victim. It can have emotional, physical, or mental health effects on them. Emotionally a person may have mixed anger, fear, humiliation, helplessness. Certain people can even feel ashamed. These emotional outbursts can seriously affect the mental well-being of the individual. Physically, sexual harassment victims may experience increased stress levels, headaches, disturbance in sleeping and eating patterns.

Depending upon the mental state-certain individuals may feel anxiety. Depression, panic attacks, or PTSD, to name a few. Apart from the psychological harm that harassment does to victims, it also harms businesses. When women are harassed at work, they quit, taking their ideas, relationships, and potential.

Employers are duty-bound to promote a harassment-free environment for every person working in their organization. However, along with the employer, the employees also have certain duties towards promoting a healthy work culture. Let's explore them all.

The responsibility of the employer in preventing sexual harassment are:

The first step in this direction is the formulation of an effective sexual harassment policy. The policy should clearly define the staff's rights, roles, and responsibilities. It should also set out the procedures to deal with sexual harassment promptly and efficiently. Employers should also make sure that the policy is accessible to staff members with disabilities. Employers should endeavor to deal with any harassment case reported sensitive and unbiasedly.

The policy formulation should not be a solitary task, but it should incorporate the suggestions of the management as well as the employees. This step will inculcate an emotion of inclusion amongst everyone. Further, the policy should always be open for regular review and changes required on a timely basis.

Every person working in the particular organization should be aware of the existence of an anti-sexual harassment policy, the procedure to file any such grievances, and effective steps taken for resolving such complaints. Thus, people should be educated about their rights and their safeguard measures.

All the staff members and management should be provided regular training and information on sexual harassment. Conducting regular training sessions can be a key towards imparting education. Further, the focus should be on behavioral training, which means that it should enhance the knowledge and understanding of specific behaviors that may amount to sexual harassment.

An act of sexual harassment can have serious mental, physical and emotional effects on the survivor. Some cases may even go unreported either due to fear or dishonor felt by the victim. The employer should ensure creating pathways that will ensure confidentiality. Also, this can streamline the process of investigation without affecting the workplace environment.

Taking timely actions reflects the credibility of the company. This also sets an example for the people and can minimize the chances of such incidents shortly. Along with the employers, the employees should themselves be highly observant of the workplace environment. Any such behavior observed should be reported immediately. This will create a support system for the victim who might otherwise be hesitant to report.

All the staff members have a responsibility to:

A victim of sexual harassment at the workplace should report the issue to the concerned authority immediately. The management is obliged to take the necessary action according to the guidelines enlisted in the sexual harassment policy. If the grievances are not registered, following lawful action could be taken. Every state in the U.S.A follows a different policy. Depending on which state the case is to be filed, the complainant has either 180 days or 300 days to file the case with EEOC. State deadlines can be found on the official website of EEOC. Further, to file an unfair labor practice claim, the victim has a period of six months from the date when the act took place. More information is available at the official website of NLRB.

Any progressive society cannot afford such societal menace. Along with the psychological and other damage harassment causes to victims, businesses suffer too. Such experiences can even compel employees to leave their jobs, taking their ideas, connections, and potential with them. This leads to companies losing their valuable assets. Harassment can also adversely affect the cohesion and functioning of teams. Companies can lose their valuable employees if they don't work to eliminate sexual harassment.

Such incidents can be minimized by employee training, transparency, and proactive responses. Thus creating a more safe, healthy, and productive workplace is possible. Employee training protects against inappropriate behavior and unwelcome advances by clearly outlining violations and empowers people who may be subjected to sexual harassment to detect and report such incidents. The training fosters a sense of community and safety in the workplace, with everyone working toward a single objective.