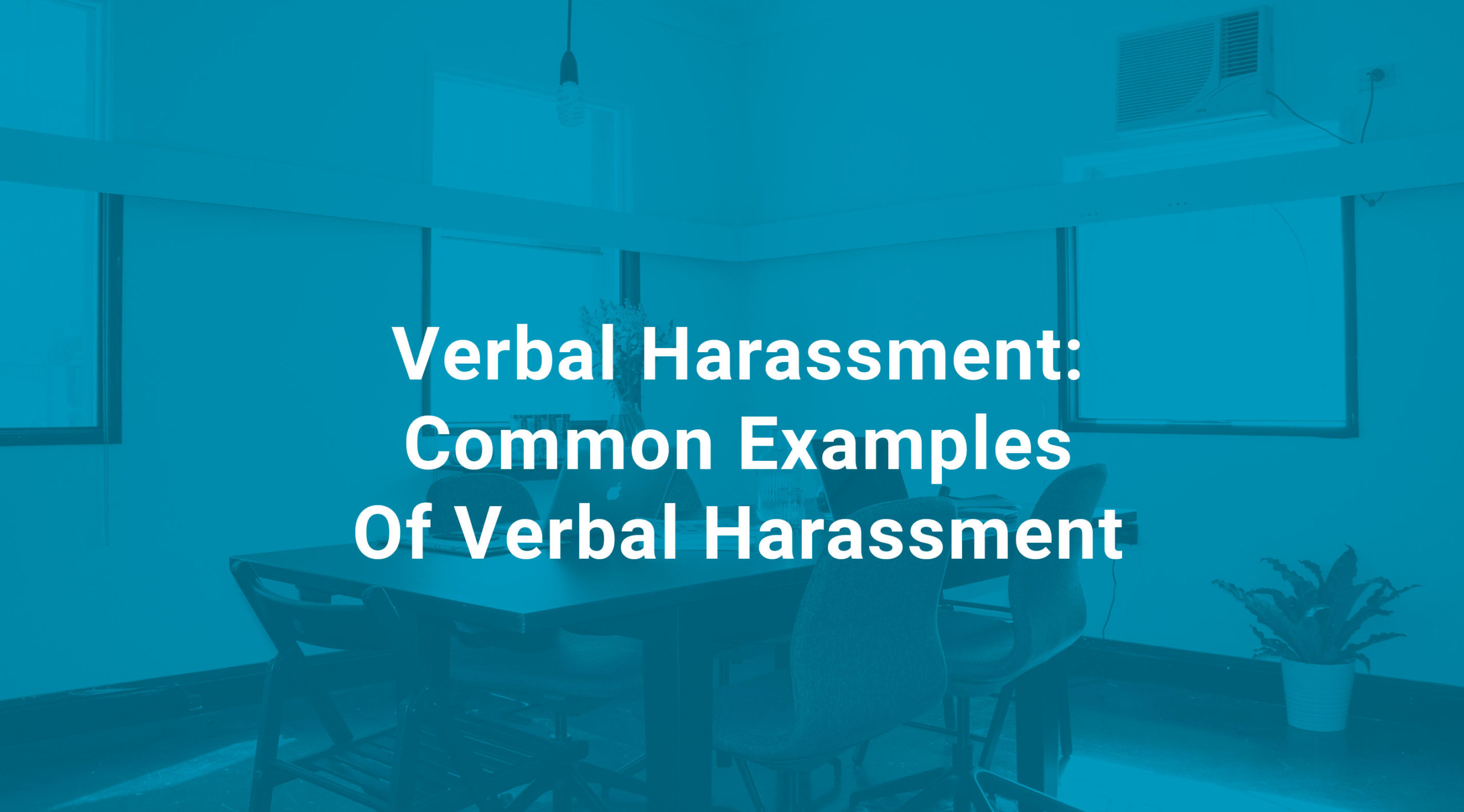 Verbal harassment in the workplace includes insults, jokes, slurs, calling names, criticizing, etc., that are mostly intended towards a sexual motive. Verbal harassment may occur from colleagues and bosses, leads to employees' discomfort, and is a severe issue.

The Civil Rights Act prohibits harassment based on personal traits in the workplace. Companies are not permitted to prejudice or reject employees based on unique characteristics such as ethnicity, race, nationality, or religion.

These kinds of subjects are frequently the source of workplace mocking. They may also begin with sexual issues or sexual misconduct. This type of verbal harassment is prohibited in all situations, and an individual can take institutional and judicial action to oppose it.

Some sorts of verbal harassment fall into the definition of workplace violence, which is meant to regulate or cause or is capable of causing death or serious bodily injury to oneself or others or property damage.

This type of harassment can include:

One of the numerous indicators of verbal harassment is disguising a harmful remark as a joke, something many people are unaware of at the time. Many people think that a person who gets offended is overly sensitive and insecure. But verbal harassment isn't a banter innuendo. Whistling, provocative glances, or harsh words and gestures were encountered by 13% of all women victims of the attack, and humiliating comments about their appearances or clothing of choice were received by 10% of all women.

Racial insults, rude or insulting statements regarding a person's race or color, or the exhibition of racially offensive symbols are all examples of harassment. Racial harassment, for example, joking or judging someone based on their nationality or language, produces a hostile or harsh environment and results in an unfavorable employee's work performance.

Every instance of name-calling is a type of verbal abuse. Even if the names are stated neutral, this is not an appropriate way to treat someone else. Critical, caustic, or ridiculing comments that are designed to put you down are examples. These might be remarks on how a person dresses, talks, or their IQ. Essentially, shaming is any statement that makes you feel inferior or unworthy.

Insulting based on race, caste, occupation level, or education is yet another effort to demean. The abuser's remarks might be caustic, dismissive, and condescending. It's all to help people feel better about themselves. For instance, if a superior or colleague tells you, “Let me explain this to you in a more easier and simpler manner so you will also be able to understand.”

Outright threats might lead to an increase in verbal abuse. They are designed to terrify people into complying. Hazards can be both personal and professional.

Accusing people roots from being jealous or envious or simply attempting to cause trouble. Or perhaps they are the perpetrators of such conduct. In any case, it might cause a person to wonder if they are doing something improper. For instance, "I have observed that the boss asks you to stay late for work alot, is there something going on?"

Verbal harassment can occur both in public and in private. While verbal abuse is not unlawful in and of itself, it is forbidden in the workplace when combined with sexual misconduct or discrimination.

According to the employee, his boss made discriminatory statements to him, including that he "looked like [he] was trying to blow up the World Trade Center" and made nasty comments about Arabs. Even though the individual reported this behavior to his boss, nothing was done to stop it, and the employee finally resigned. The matter was subsequently resolved for $50,000 by the firm.

After being forced to report to the same abusive boss again, the employee was eventually compelled to resign due to the toxic workplace. He lodged a complaint with the EEOC, which launched a lawsuit against Golden Corral's parent business, Jax, LLC. The dispute was ultimately resolved for $85,000.

What is the Protection against Verbal Harassment?

Title VII of the Civil Rights Act of 1964, the Age Discrimination in Employment Act of 1967, define harassment as unsolicited conduct directed at a person based on race, religion, color, nationality, sexual preference, gender, impairment, or genetic factors, according to the United States Equal Employment Opportunity Commission (EEOC).

The majority of Americans feel that the management of their firms takes sexual misbehavior extremely seriously, which is extremely promising. Only 5% disagree, claiming that their organizations are tolerant when it comes to terminating CEOs and others accused of sexual misconduct. Such conduct is illegal in the workplace if the person targeted is subjected to it as a condition of retaining their employment or if it is so severe that it is threatening, hostile, or abusive to the immediate receiver or anyone around them.

Each state has its own set of protected characteristics, which might include relationship status or gender identification.

One reason it might be challenging to determine what constitutes abusive conduct — and to punish the bully — is that people with various personalities have varying amounts of tolerance for mocking, gossiping, or sexual jokes. One individual may be ok with it, while another dreads going to work and is prepared to resign due to the same circumstances.

If you experience a kind of fear of going to work and stressing about what could happen there in your spare time, it might be a warning sign. Other changes, such as increased blood pressure while near the abuser, sentiments of guilt or shame, or a situation to avoid doing activities you formerly loved, are all said to be the consequences of workplace harassment.

While these are the most visible instances of anti-discrimination legislation, safe working environments result from well-planned and successfully enforced individual employment legislation. If you own or work for a small business, do your best to promote and establish a good policy that protects your staff and coworkers.

Leaders at every level must take responsibility for avoiding verbal harassment in workplaces. This can be achieved by conducting training programs frequently and helping employees recognize these harassment and act accordingly.