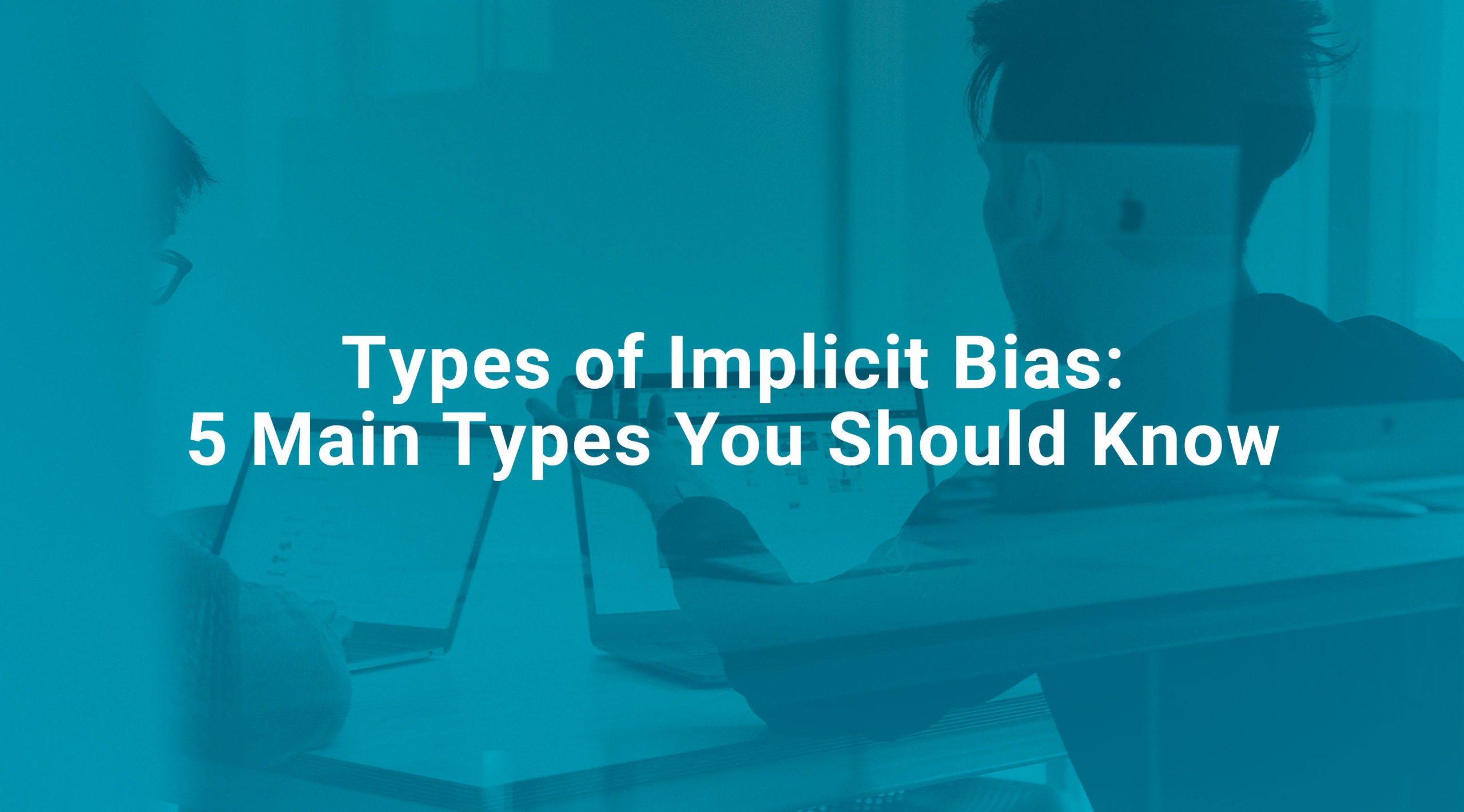 Types of Implicit Bias: 5 Main Types You Should Know

There are 5 main types of implicit bias that can be seen in the workplace. Implicit bias is a concept that refers to the tendency of people to make automatic and often unconscious judgments, decisions, or inferences about a particular group of people without regard to the individual characteristics of that group.

Implicit bias can be based on race, gender identity, age, sexual orientation, physical ability/disability status, and other factors. Companies need to know about their employees' implicit biases because it can lead to discrimination against certain groups of people.

Implicit biases can be found in all aspects of our personal and professional lives. According to Malcolm Gladwell's book Blink: The Power of Thinking Without Thinking, around 3.9% of adult men are 6 feet, 2 inches, or taller. Nonetheless, he discovered that nearly a third of CEOs, or 33.3%, fit into this category in a random sample.

This, according to Gladwell, could be due to an ingrained assumption that height is related to success. This theory is supported by a 2020 Chinese study. According to it, each centimeter of height above average was associated with a 10% to 13% rise in annual wages.

We all have types of implicit bias about various social groups, and these biases can negatively affect our social, educational, and work situations. Implicit biases are damaging because they affect how we see and interact with others, and they might lead us to depersonalize persons from other groups depending on perceived qualities. Learning to recognize and overcome prejudice and social and racial stereotypes is crucial to overcoming prejudice and stereotypes.

Implicit associations are the automatic mental associations we have without thinking about them. For example, when we see a person of color or a woman in a leadership position, we might feel that they are not qualified for the job. Implicit stereotypes are our beliefs about people based on their group membership which can be found in many social systems such as education and work.

Implicit bias as a concept primarily refers to the types of bias that refer to the automatic, unconscious, and sometimes uncontrollable mental processes that guide decisions and interactions. Implicit bias is not limited to any particular group of people or any single type of prejudice.

Implicit bias is a type of prejudice that is not necessarily intentional but rather a result of the subconscious and automatic way people process information. Different types of Implicit bias can be described as any judgment or decision made without conscious awareness. People can decide based on their past experiences and cultural assumptions. The types of implicit bias are:

Gender bias happens when individuals automatically presume that a specific gender is better equipped to handle a particular occupation, regardless of an individual's qualification or experience in a particular field. For example, women make better nurses due to their femininity.

This concept refers to the prejudice or discrimination against a person because of their race or ethnicity. Race and Ethnicity Bias was brought up in the late 1960s. It's considered one of the critical concepts in sociology and social psychology. Dr. Kenneth Clark coined the term in 1966 after conducting a study on children's perceptions of race.

In recent years, this concept has been used to refer to both explicit and implicit prejudices based on race or ethnicity, which can be seen through actions such as stereotyping, discrimination, and exclusion from opportunities.

Ability bias is a term that refers to the tendency of people to favor those who possess skills and talents that are similar to their own. Ability bias can occur in many different contexts, including education, employment, and healthcare. People with disabilities often face discrimination due to ability bias.

Age bias is the discrimination or prejudice against people or groups of people because of their age. Age bias can be seen in many different forms, such as employment and education. Ageism is a form of discrimination based on age. Ageism can be defined as a "prejudice or generalization about the value of human beings solely based on age." The term was coined in 1969 by Dr. George Erikson and was quickly adopted by other academics who were interested in studying ageism from a sociological perspective.

This has led to many forms of discrimination and violence against them. In recent years, people in the LGBTQIA+ community have been fighting for inclusion and equality in society. Another example of milder types of implicit bias against the LGBTQIA+ community is when a medical practitioner questions a male if he has a girlfriend when conversing on the topic of his sexual history.

What Are The Other Types of Bias?

Implicit bias can manifest itself in a variety of ways, including:

This is the tendency for people to gravitate toward those similar to them.

When someone is attractive, they are more likely to be treated positively.

An individual's predisposition to judge someone based on their name — and hence perceived background — which can harm a company's employment processes is known as name bias.

When someone is overweight or underweight, people are more likely to judge them adversely or infer bad things about them.

How To Overcome The Different Types of Implicit Bias?

Implicit bias is the idea that people are unaware of the stereotypes they hold and act on them unconsciously. It's a difficult concept to understand, but it's also essential in understanding how we treat others.

We all have implicit bias, but it doesn't necessarily mean that we're racist or sexist. It just means that we're going through life with a particular set of assumptions about other people based on our own experiences.

You can overcome your implicit bias by understanding the biases you hold and how they affect your life and interactions with others.

The multiple types of Implicit bias are the unintentional mental associations and stereotypes that affect how people make judgments, decisions, and behave. For example, when we think about a 'black person,' we might automatically associate them with criminality.

Some ways to overcome your implicit bias are to pay attention to how you think about people and what you are saying about them. If you find yourself making assumptions about someone based on their race or gender, try not to do this and instead focus on facts.

Implicit bias is the idea that we make assumptions about people based on their race, gender, and other demographic markers without being conscious of them. These assumptions are not always accurate and can lead to discrimination.

While different types of implicit bias exist in the workplace, school, and social contexts, it is possible to avoid it by being aware of it and making intentional decisions. Taking stock of your prejudices and devising tactics to overcome them can contribute to a more egalitarian society for everyone.