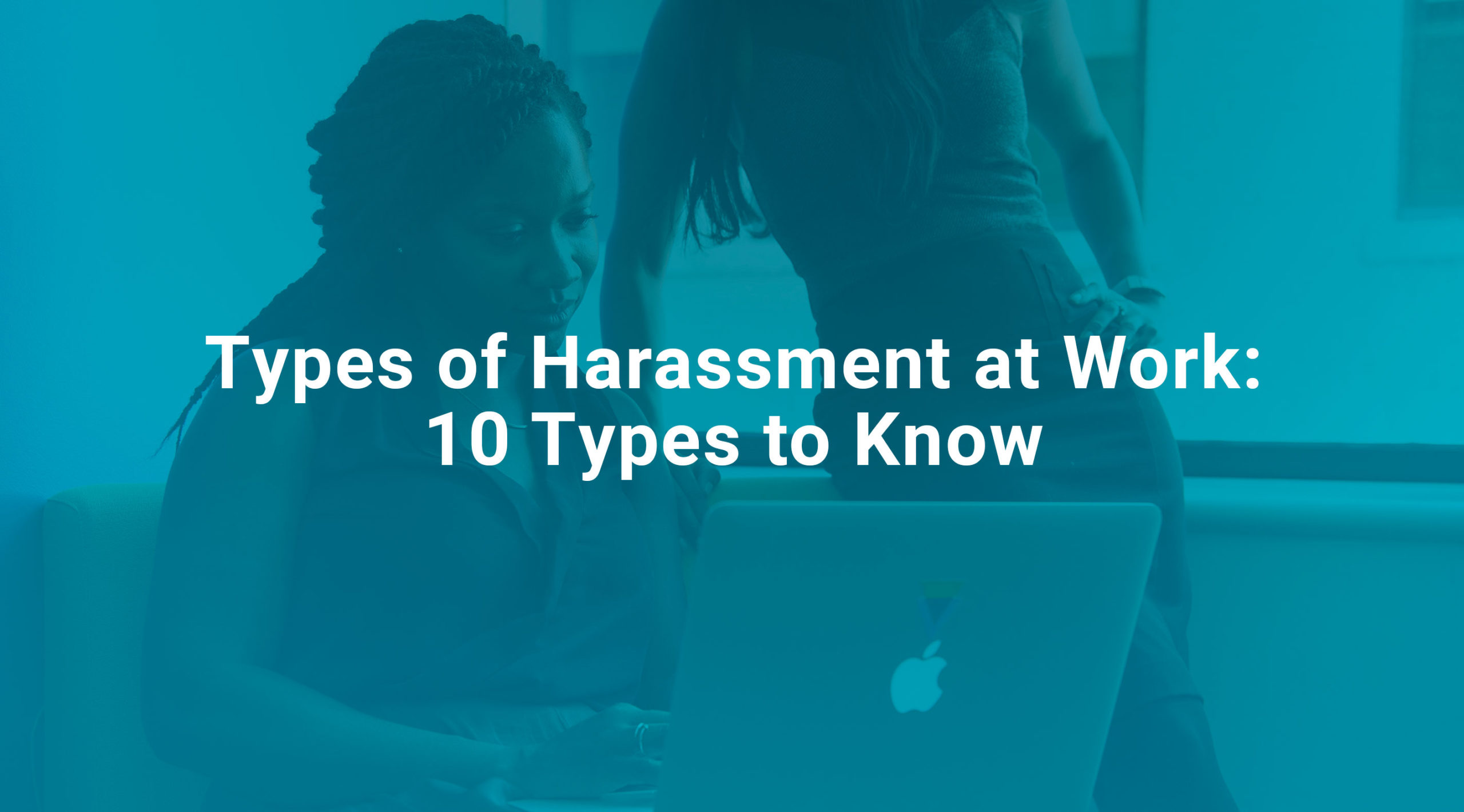 Types of Harassment at Work: 10 Types to Know

We can observe various types of harassment at work. Harassment includes an extensive range of offensive behavior. Such behaviors are very disturbing, embarrassing, upsetting, or even threatening. It is an unpleasant behavior that discriminates against people based on race, color, religion, sex, disability, genetic information, age, nationality, and many other factors. Harassment at workplaces has become a serious issue. Companies need to pay immediate attention to it. Otherwise, it may cause other problems such as low work morale, employee turnover, reduction in work productivity, absenteeism, damages, and litigation costs.

What is harassment at work?

Workplace harassment is a part of employment discrimination that violates Title VII of the Civil Rights Act, 1964, Americans with Disabilities Act, 1990, and Age Discrimination in Employment Act, 1967. The term “workplace harassment” refers to the criticism and bullying of an individual or group at the workplace. Such a behavior can be seen at most workplaces but is avoided to speak openly in the work environment. At times, it causes a toxic and abusive work environment.

Given below are some of the different types of workplace harassment:

Most of the time, workplace harassment occurs because of the discrimination between the victims and the offender. It may be based on race, gender, religion, disability, and age.

Personal harassment is when an individual or group of individuals is bullied or threatened. Here, offensive behaviors are conducted to make the victim feel uncomfortable and in an intimidating work environment. Personal humiliation, inappropriate comments, evil tactics, critical remarks, and offensive jokes can be considered Personal harassment.

As personal harassment does not include any physical attacks, there is no evidence in such cases. So, the organizations must focus on having strict anti-harassment policies. In this way, the victim may not face any problem filing complaints against the offender.

Sexual harassment is one of the most disgraceful and inexcusable crimes. It is not only faced by women, but a person belonging to any gender can be victim of sexual harassment. Attempting sexual harassment may include asking for sexual favors, unwanted touching, vulgar gestures, etc.

However, such cases of sexual harassment remain unnoticed most of the time. So, the offender becomes more fearless and gets encouraged. That is why the victim must sue the offender for the course of action.

Verbal harassment means threatening an individual or group of individuals to destroy their health and career. In such cases, the employee is criticized harshly. It often includes body-shaming jokes, comments, demeaning slurs, offensive gestures, etc.

It cannot be easily recognized. But, the HR managers and the higher-ups should be aware of it. After noticing such behavior at the workplace, the higher authorities must take severe action against it.

Psychological harassment also includes deliberately making impossible demands and taking credit for others’ achievements. The higher authorities should pay attention to such actions and set certain norms for the organization.

Quid-pro-quo is a kind of sexual harassment. The term “quid-pro-quo” is a Latin phrase that means something in return. In short, quid-pro-quo harassment means to offer the victim job benefits in return for sexual conduct. The higher-level employee or the boss is the offender who asks for sexual favors in exchange for the job benefits.

Such behavior must be avoided in the workplace. The employees must get the benefits and perks based on their hard work and not in exchange for a sexual favor. Organizations must set strict norms and regulations to avoid such misconduct.

Most of the time, third-party harassment remains unnoticed as the victim is afraid to report it with the fear of losing their jobs. Organizations need to pay attention to such problems, no matter how important the client is.

The rapid growth of digital transformation has given rise to cyberbullying (also known as digital harassment). Such harassment occurs when fake personas are made to threaten or blackmail the victim. Posting threats, demeaning comments, creating fake web pages, and posting false allegations are a part of cyberbullying.

Most of the time, the complaints about workplace harassment are ignored due lack of proper evidence. In case of cyberbullying, filing a complaint becomes easy. The victim can easily take screenshots of the emails and threatening messages.

Retaliation is a kind of harassment undertaken to take revenge. It occurs when the victim reports a complaint against the offender. It is practiced to stop the victim from complaining and being guilty themselves.

With the fear of retaliation harassment, the victims do not report any complaints against the higher authorities at the workplace. If the victim faces any violence or threats after filing the complaint, they can again file a complaint.

Workplace harassment has essentially become a serious issue. Most employers experience harassment at the workplace. But, no one takes action against it for fear of further consequences (such as losing jobs and retaliation harassment). The organizations must immediately look into it so that the victims may not suffer allegedly and the betterment of the organization. Organizations must create appropriate policies and norms based on all types of harassment. By doing so, the employees will work more productively and comfortably.

Toxic and offensive work environments may sometimes be uncomfortable for the employees. So, for the betterment of the organization, certain anti-harassment principles and policies are essential.