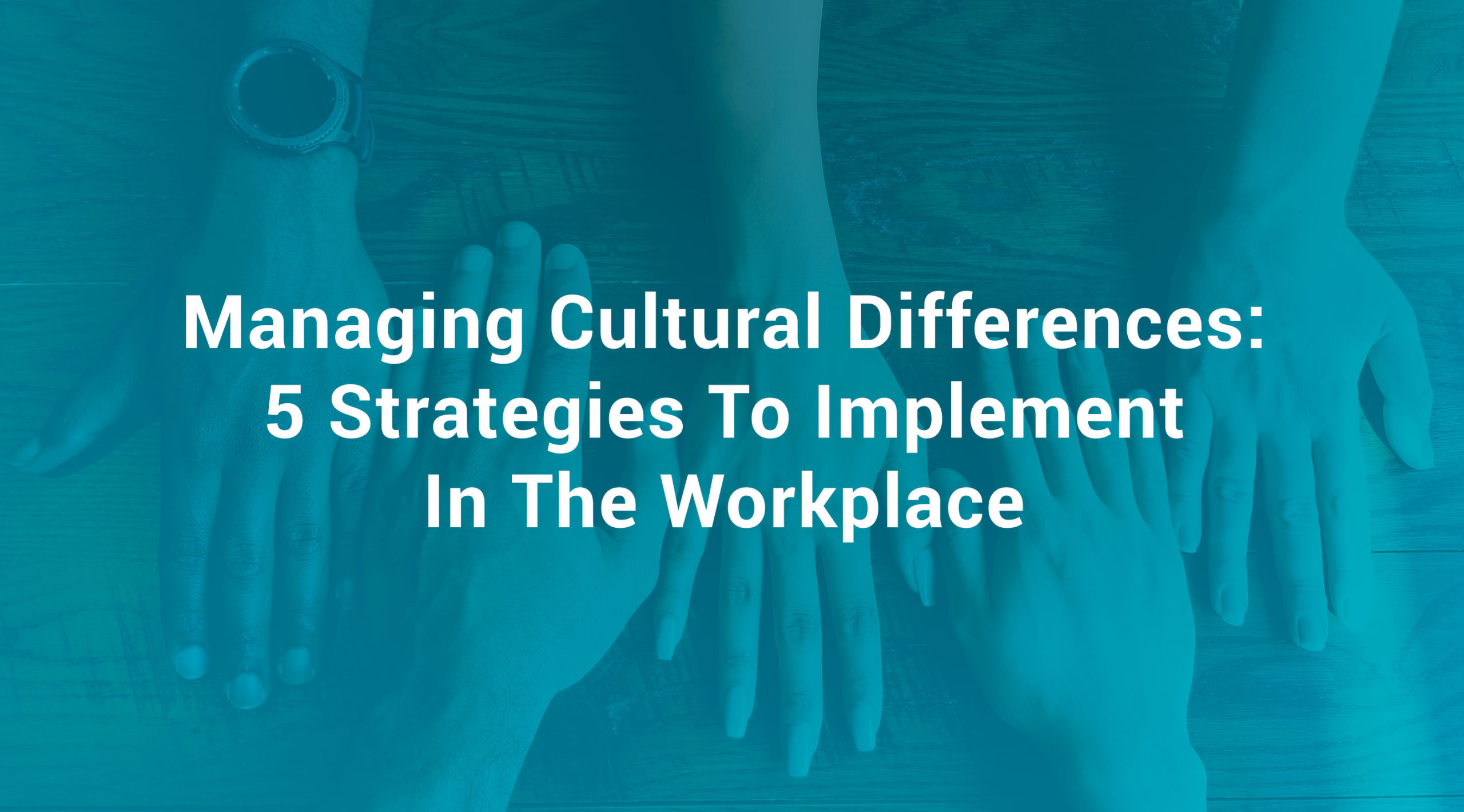 Managing Cultural Differences: 5 Strategies To Implement In The Workplace

Interchanging and fusion of cultures became a natural result of fast globalization and immigration, both interstate and intrastate. The economy is a major beneficiary of this new trend, and businesses play an important role in it. Employees' habits, attitudes, traditions, or beliefs based on ethnicity, nationality, culture, language, or sexuality create cultural differences in the workplace.

This may happen when someone of any nationality travels to work in an organization in a country that is perhaps somewhat different from their own - for example, when an Indian technician goes to work in the United States, or a British person goes to work in China.

Maintaining cultural distinctions in the workplace entails a well-integrated and well-maintained system of socially learned values, beliefs, and standards of conduct that influence the spectrum of acceptable behaviors that may be distinguished from one socioeconomic group to the next. Cultural competence is defined as the capacity to comprehend, interact with, and effectively engage with individuals from other cultures, as well as the ability to work with different cultural beliefs and timetables.

Types of Cultural Differences in the Workplace

According to Harvard Business Review, organizations with a wide variety of employees were 45 percent more likely to increase market share in the preceding year. It's critical to recognize that culture encompasses a variety of factors such as a person's origin, language, and area. The following are some of the most important cultural factors that influence employee behavior at work:

Every generation has its traits. Employees classified as baby boomers, for instance, are more likely to associate their identity with their career or the type of work they undertake. Employees classified as Generation Y prioritize professional growth and are also tech-savvy, acclimated to diversity, and embrace workplace flexibility. According to the World Economic Forum, achieving gender equality in the United States will take 208 years. Gender difference in the workplace is just as important as cultural difference. Even though there is still a long way to go, businesses are working hard every day to close the gap.

According to the Bureau of Labor Statistics (BLS), the number of African American employees in the labor force is expected to rise from 19.6 million in 2016 to 21.6 million in 2026, accounting for 12.7 percent of the overall jobs in the United States. Workplace conventions are influenced by ethnic, racial, and national origins. Certain cultures are much more straightforward about effective communication, and others are more subtle. Similarly, some nations expect employees to constantly defer to leaders and wait for chances, but others want people to take the initiative and be acknowledged.

Someone's educational experience might have an impact on how they integrate into a business setting. People with different educational backgrounds use diverse sorts of intellectual capital to resolve conflicts and manage challenges in the workplace. Because many firms hire for roles based on academic or similar professional experience, this can lead to persons with vastly different educational backgrounds working on the very same tasks and using various approaches based on their academic qualifications.

Religious identity significantly influences people's values, which might influence their work behavior and priorities. Religion can influence how individuals see ethical conduct in the workplace, impacting their decision-making. People have the freedom to practice their religion. Therefore organizations need to have rules in place that accommodate people's personal beliefs while still preserving responsible business practices for clients and consumers.

Managing Cultural Differences in the Workplace

When recruiting a new employee, it's critical to have a conversation with them about their expectations for the workplace and to obtain a sense of their requirements. This contributes to a good working culture, and while open communication is vital for all team members, it is especially critical for individuals from diverse cultures.

Being aware does not mean acting as though everyone is the same, but rather embracing and enjoying diversity. When employing team members from diverse cultures, it's critical to make sure that their cultures are acknowledged and valued. According to Glassdoor's research, two-thirds of potential workers think about diversity while assessing a job offer.

Ensure that everyone understands that racial remarks, even if meant as a joke, are unacceptable and will result in disciplinary action. Be aware of any cultural requirements that your staff might have. Some individuals don't eat specific foods and wear headscarves for religious reasons. Ascertain that all of these items are accounted for and included, then inform the organization's members.

Festivals, significant days, and holidays vary widely among people of various cultural, ethnic, and religious backgrounds. The corporate world follows the western secular year, which begins on January 1 and ends on December 31. On the other hand, some societies employ different calendars to define the New Year or certain holy days.

However, all other culturally significant occasions must be accommodated by organizations. You may also hold small-scale activities for their cultural or religious celebrations during their lunch breaks or after office hours. Coworkers will be able to have a deeper understanding of their teammates from varied cultural experiences in this manner. And this is necessary to keep the business running.

Every culture has its unique communication style, which includes things like speech patterns and nonverbal communication. Knowing the team's heritage helps you understand their social practices and plan to adapt them. Body language, facial gestures, and mannerisms are all examples of nonverbal cues.

It's critical to be aware of different communication styles across cultures and to communicate to your coworkers following these guidelines. It might be perplexing, but both the management and the staff must adjust. An employer should be adaptable enough to recognize various ways of communicating.

Even though most businesses need formal or at least appropriate attire, some civilizations, often in religious contexts, mandate a specific clothing code. Some Islamic females wear the hijab, whereas Sikh males wear the turban. Restricting someone's right to practice their faith is immoral.

New generations, who prioritize individual expression above compliance and conventional professional attire, dress more informally at work than older generations, who favor uniformity and traditional professional wear. The non-interference of religion or prejudices into professional activities is a requirement of secularism. However, it does not strive to eliminate the viewpoint or practice in question; rather, it supports an individual's freedom to freely exercise it as long as it does not create any difficulty for others.

Maintaining cultural differences can be difficult, but it is ultimately beneficial to any corporate setting. Engaging in cultural differences in the workplace does not have to be as tough as it may appear; as long as these procedures are followed, and cultural differences are respected, your workplace should be a joyful and inclusive environment. This is particularly important for businesses with a global presence as their immigrant employees may assist them in understanding the conventions, meanings, and values of many cultures.