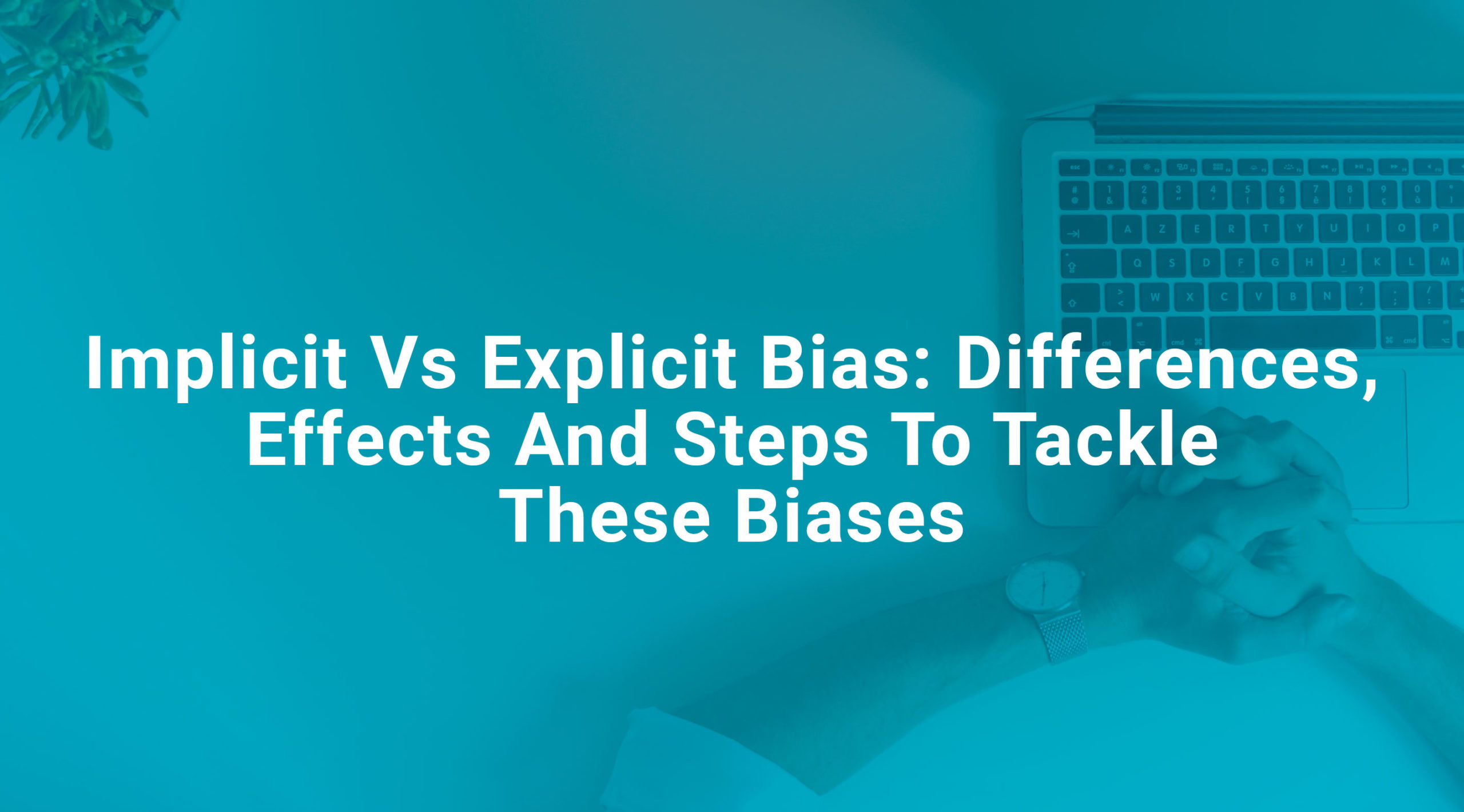 Implicit Vs Explicit Bias: Differences, Effects And Steps To Tackle These Biases

Implicit bias (also called unconscious bias) refers to attitudes and beliefs that occur outside your conscious awareness and control. Explicit bias, on the other hand, are biases that you are aware of on a conscious level.

It is important to understand that implicit biases can become explicit biases. This occurs when you become consciously aware of the prejudices and beliefs you possess. That is the surface in your conscious mind, leading you to choose whether to act on or against them.

Continue reading to know further about implicit and explicit bias and the difference between both.

Implicit biases are attitudes or stereotypes that affect our understanding, actions, and decisions in an unconscious manner. People are not even aware of when these biases occur. They are prevalent and permeate throughout the workplace at all levels.

Explicit bias refers to the attitudes and beliefs we have about a person or group on a conscious level. Much of the time, these biases and their expression arise as the direct result of a perceived threat. When people feel threatened, they are more likely to draw group boundaries to distinguish themselves from others.

Effects of Biases at Workplace

There are more than 150 cognitive biases, with five that have direct impacts within the workplace:

Numerous studies show that explicit forms of differential treatment contribute significantly to the underrepresentation of women and racial and ethnic minorities.

The most explicit forms involve sexual harassment, unfair pay, and bias in the allocation of promotions and work assignments.

Bias influences decisions at all levels of an organization. When biases are not addressed, they can affect :

While it may be impossible to completely eradicate these biases, there are certain steps to reduce the chances as many decisions are influenced by them. Follow these nine steps to limit your organization's unconscious or implicit biases.

The first step of limiting the impact unconscious biases have on your organization is making sure everyone is aware that they exist. “Awareness training is the first step to unraveling unconscious bias because it allows employees to recognize that everyone possesses them and to identify their own”.

Take tests to figure out which of your individual perceptions are most likely to be governed by unconscious biases. Armed with that information, you can take proactive steps to address them on a personal basis.

Biases tend to affect who gets hired, who gets promoted, who gets raises and who gets what kind of work, among other things. By knowing where bias is most likely to creep in, you can take steps to ensure that biases are considered when important decisions are made in those areas.

In order to make sure that unconscious biases do not adversely impact your hiring decisions, you may need to make some big changes. Rework job descriptions so that you are able to draw from a wider pool of applicants. Do not look at anyone’s name or gender and instead hire on merit alone. Additionally, consider giving candidates sample assignments to see what their work contributions might look like. Finally, standardize the interview process, as unstructured interviews tend to lead to bad hiring decisions.

If your company’s upper management echelons are only staffed by white men, unconscious biases are determining which employees are promoted. Make it a priority to diversify your management team so that more voices and backgrounds are represented.

If your goal is to hire a diverse staff, make sure that there is diversity among the group of people tasked with hiring new employees. Otherwise, you may continue hiring the same kinds of homogenous workers — despite your best intentions.

The more people involved in a decision and the more transparent the decision-making process is, the less likely an organization will be to be affected by unconscious biases. Create a culture that encourages open communication. That way, when employees realize a decision might have been influenced by unconscious biases, they won't be afraid to speak up and set the record straight.

While you should not necessarily punish someone for making a decision influenced by unconscious biases, you should keep track of whether such decisions are being made. If the data reveals bias, someone may need to intervene.

From more innovation to more talented employees to higher retention rates, there are a number of reasons why companies should focus on creating diverse workplaces. Set diversity and inclusion goals to make sure that your diversity program is more than just lip service and you actually make progress toward building a diverse team.

From an organizational perspective, the sooner you realize the reality and take proactive steps to overcome the biases that hold you back the stronger your companies will become, and the better positioned you will all be to serve your customers effectively.

What Can Be Done About Explicit Bias?

Expressions of explicit bias (discrimination, hate speech, etc.) occur due to deliberate thought. Thus, they can be consciously regulated.