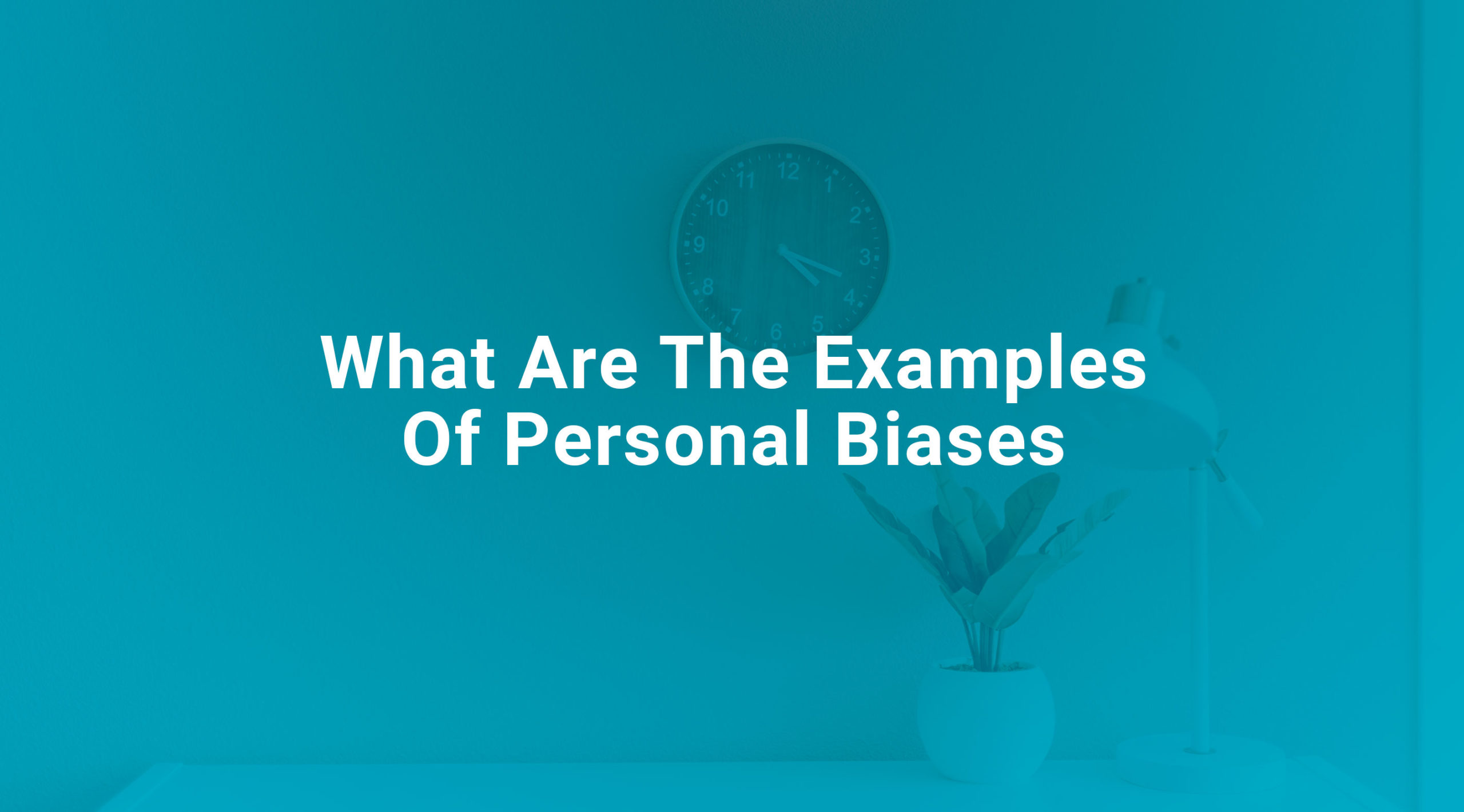 What Are The Examples Of Personal Biases

Examples of personal biases help us identify situations in our daily lives that we tend to overlook. Personal bias refers to learned beliefs, opinions, or attitudes that people are unaware of and often reinforce stereotypes. These personal biases are unintentional, automatic, and inbuilt, leading to incorrect judgments.

Developing a diverse workplace should be an absolute preference, but more exposure to personal bias comes with a diverse organizational culture. These biases have a substantial influence on our beliefs and conduct. They impact the workplace hiring process, and influence significant business decisions.

Furthermore, even when these personal biases are prevalent, you can mitigate them with purposeful effort and attention. In addition, being aware of and understanding the different forms of personal prejudices that exist will assist you in determining and fighting them.

Here are some of the top examples of personal biases prevalent in every workplace:

Gender bias is one of the topmost examples of personal prejudice, which is far more prevalent than you think. When specific characteristics (such as power or confidence) are seen adversely by one gender but positively by the other gender, this bias occurs. Negative gender bias often prefers women, making female workers feel disengaged and undervalued in the organization. In addition, workplaces affected by gender bias risk missing out on numerous opportunities.

Furthermore, one of the prevalent personal bias examples in the gender prejudice context is "Bropropriating". It occurs when a female team offers a suggestion that goes unnoticed and when a male member makes the same suggestion, everyone agrees. This prejudice might cause female workers to remain reluctant to voice their ideas, which can be bothersome and demotivating.

When individuals get the work according to their age, age prejudice occurs. An instance would be a tech-heavy task, where personal bias can lead a supervisor to think that a younger employee would be better suited to the assignment than an elder one.

In addition, assuming a person's expertise or ability is exclusively based on an idea that never remains backed by facts is an ideal example of personal bias. After all, numerous older people are digitally capable, so thinking they wouldn't be right for the position would be unjust.

Another typical example of personal bias in a workplace is the halo or horn effect. This prejudice occurs when people use one characteristic or event to generalize someone's performance or personality. The halo effect happens when positive quality is present, while the horn effect ensues when an unfavorable feature is present. It can damage a company's reputation and efficiency by providing employees partial feedback.

When it comes to choosing applicants for a job interview, this type of personal bias comes up often. Supervisors can remain prejudiced when reading names they feel "foreign" despite their best discretions. However, this is still a prevalent issue as it can subdue diversity and stop many eligible candidates from being interviewed.

Similar prejudice occurs when we choose to work with individuals like us. It might comprise persons who have graduated from the same educational institutions, employees who have worked for specific businesses, and so forth. Companies influenced by the similarity prejudice risk a lack of diversity in their views and attitudes, leading to less problem-solving aptitudes.

The inclination to favor people who share identical backgrounds, interests, and expertise is known as affinity bias. Individuals who are similar to us make us feel more comfortable. Nevertheless, this personal bias could influence hiring decisions. For instance, a hiring manager may employ a job candidate because they went to the same university.

People often make judgments based on comparisons. As a result, depending on what criterion they compare things, their opinions may remain skewed, known as contrast bias. Positive contrast bias can occur when something is more convenient than usual because people compare it to worse.

Confirmation bias is yet another example of personal bias where people remain inclined to seek out and employ information that demonstrates one's beliefs and anticipations. In other terms, cherry-picking data to prove specific points and impact a person's capacity to think logically and objectively. In addition, it can point to incoherent understandings of data and ignoring information with conflicting opinions.

For instance, a product designer proposes a product vision for the athletic market. Even when the market research indicates slight interest in the product, they try to prove the vision by reaching out to athlete friends who can back the idea.

This personal prejudice depicts a person's preference for the way something is or for something to stay as it is, indicating a resistance to change. Also, even when this status quo prejudice is a safe option and requires less effort, an organization becomes stagnant.

As the industry landscape continues to move, change is essential for company longevity and innovation. An instance of the status quo prejudice in a business is continuing to employ team members from a similar demographic level, not attempting to drive ahead with diversity goals.

Overconfidence prejudice is the propensity for individuals to believe they are better at some capabilities and skills than they truly are in reality. This inaccurate review of aptitude levels, arising from an illusion of understanding or authority, can lead people to make rash decisions.

For example, an overconfident business leader determines to acquire a company they see increased potential in and feel will get high earnings even though their performance exhibits otherwise. Past success or achievements may lead to an overblown ego. While leading with conviction is a good thing, you must never allow it to get in the path of rational thinking and decision-making.

Perception discrimination happens when people judge or treat other people based on usually incorrect and excessively simplistic assumptions regarding the other community group. It may concern other prejudices such as age, gender, and appearance.

This kind of discrimination may result in an overall decline of a business's diversity objectives and social exclusion.

While it is impossible to eradicate personal biases in a person entirely, awareness and training can assist in overcoming these personal unconscious biases. In addition, the most suitable way to reduce the adverse impact of personal prejudice is exposure to individuals who are distinct from us. Furthermore, increased one-on-one communications and working towards the same goal can also help people break the stereotype and welcome people from every walk of life.

Apart from that, companies can provide their employees with an opportunity to work at cross-functional levels to earn exposure to diverse viewpoints and roles. As hiring supervisors present the most risk from working on their prejudices, offer them a chance to promote cross-functional communities to overcome their biases.

Finally, we can say that personal prejudice offers numerous risks to a company. Therefore, taking measures to overcome its consequences can assist you in improving diversity and creating more accurate hiring approaches — resulting in a more adaptable organization where it's easier for innovation to succeed.