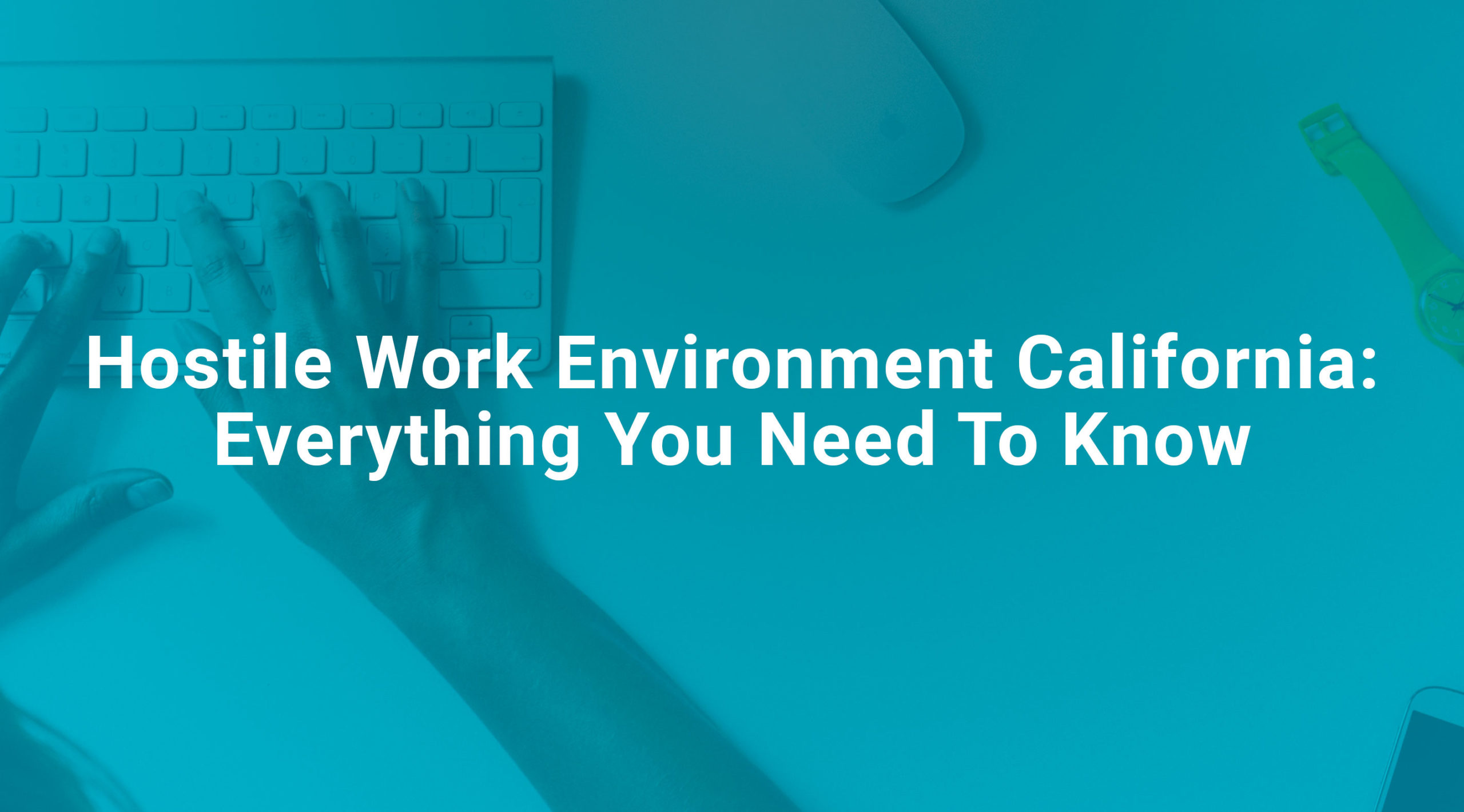 Hostile Work Environment California: Everything You Need To Know

A hostile work environment in California is regarded as inappropriate behavior that is either severe or pervasive enough to create an abusive work atmosphere for one or more employees. This form of workplace harassment is prohibited under the Fair Employment and Housing Act (FEHA), a 1959 law in California that aimed at tackling unlawful discrimination practices such as sexual harassment in employment and housing.

Workplace harassment and bullying can turn a workplace into a hostile environment where you do not feel welcome and constantly fear for your job or safety. Racial slurs, unwelcome sexual advances, and other inappropriate behavior are form part of a hostile work environment.

Anyone in the company may do such behavior, including any employee or a supervisor. Even the clients or job applicants can be responsible for a hostile work environment. Offensive conduct may take the form of sexual or gender-based inappropriate behavior. Still, it may also be non-sexual harassment, such as harassment based on race/ethnicity, religious harassment, disability harassment, etc.

Furthermore, harassment can take the form of apparent aggression but can also manifest in subtler forms such as jokes and pranks that are mean-spirited, alienating, and demeaning.

What is a Hostile Work Environment Composed of- The California Scenario

Harassments that has taken place can have legal consequences and is applicable for a legal proceeding when it has surpassed the following two limits:

As such, rare, occasional, trivial, sporadic, or isolated incidents do not qualify for a lawsuit legally. In court, improper conduct is viewed as rising to the level of "hostile workplace harassment" when it either takes place repeatedly or threatens the victim's physical well-being or safety.

As per California law, the following forms of illegal discrimination of employees are prohibited:

In case of the following situations, can a person claim legal support against sexual harassment in California:

The California Fair Employment and Housing Act (FEHA) offers legal protections for workers experiencing abuse in the workplace. Additionally, multiple federal and state laws protect employees of a protected class. Workers over the age of 40 and people with disabilities are examples of a protected class under state and federal law.

The Two Types of Sexual Harassment in a Workplace

Quid Pro Quo harassment is a sort of workplace sexual harassment. It takes place every time a manager, director, or supervisor calls for or requests that a worker trade sexual favors to attain promotions, professional advancement, or different kinds of benefits. However, this isn't always confined to verbal requests and may consist of non-verbal communication, gestures, and/or bodily conduct.

This form of harassment may also take a different form altogether. Supervisors or employers misuse their position of power to manipulate an employee into performing sexual favors by misusing company policies, making threats, or violating wage laws to coerce employees into Quid Pro Quo situations. For example-

The Rights of Employees to Report Hostile Work in California

Employees who have identified their situation as a hostile workplace as per the aforementioned criteria of pervasiveness or seriousness and targeted harassment are entitled to lodge a hostile workplace claim with the California Department of Fair Employment and Housing (DFEH).

What Can One Do About Falling Victim to a Hostile Work Environment in California?

The foremost step for an employee who thinks they are being harassed is to file a complaint with the company. Complainants are responsible for keeping records of everything related to the case. However, it must be noted that it is illegal to secretly record audio or video recordings without their consent in California.

If the employer fails to take immediately satisfactory measures, the victims may complain of discrimination with the DFEH. In employment situations, the employee has three years from the date they were aggrieved to file their claim. Before applying, the employee must obtain a notice of the right of action from the California DFEH.

The DFEH shall conduct an independent investigation, and attempt to address the situation by providing free dispute resolution services to the parties involved. If the request is not resolved, the DFEH will base its determination on the facts of the investigation. From then on, the matter will be deemed dismissed or terminated, or, if there are reasonable grounds to believe that an infringement of the Act has occurred, the DFEH may initiate litigation.

The employer must take measures to eliminate the hostile work environment as soon as it becomes known to them, emphasizing the victim's safety in the meantime.

Nobody should have to go through a hostile work environment, whether psychological or physical harassment. Responsible employers understand that employees who feel psychologically safe tend to generate greater output. This is an opportunity for intervention and change.

"When a workplace becomes toxic, its poison spreads beyond its walls and into the lives of its workers and their families. In contrast, positive organizations energize and inspire their workers. When forced to downsize, they try to soften reality's hard edges. Their leaders know organizations thrive when employees thrive."? Gary Chapman.